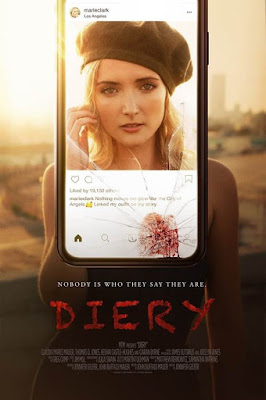 Being an Instagrammer is almost a profession these days. Likewise, films about social media stars with stalkers are almost a sub-genre unto themselves. This is not the movie that will make either respectable. When an unhinged admirer steals Marie Clark’s diary, it sends her life spiraling in Jennifer Gelfer’s DieRy (the combination of “die” and “diary,” don’t you see?), which releases today on VOD.

Clark (careful not to call her “Claire”) has something like 200K followers, so that is good enough to earn her some meaningful influencer sponsorships. Unfortunately, she still has to deal with creepy photographers. Yet, she continues to work on her masters in comparative religions, especially since she has the hots for her faculty advisor, Dr. Harris, a former special ops veteran.

After Clark’s diary is stolen during a party, she starts getting weird anonymous letters from someone who thinks they understand who she is. They also make references to the murders the unknown party starts committing. Somewhat logically, Clark suspects everyone in her vacuous social circle, except Harris, who refers her to Angus, a scrappy private investigator he knows from his murky days in military service.

It is hard to describe DieRy in way that does it justice. Basically, it starts out like a Lifetime original movie that utterly vilifies social media, but it evolves into an off-the-wall crackpot conspiracy thriller. In terms of tone, think of it as Showgirls, but with awkward Sumerian religious references instead of the sex and nudity (indeed, DieRy is surprisingly chaste). Throughout it all, most of the overheated ensemble act like they are auditioning for a new Melrose Place reboot.

Nevertheless, as Clark, Claudia Maree Mailer manages to avoid Nomi-ish excesses, while still convincingly pulling off several crazy-as-a-bed-bug scenes. Probably the best work comes Ciaran Byrne, who finds the right balance of toughness and schlubbiness as Angus. However, the villains are conspicuously telegraphed, by both John Buffalo (youngest son of Norman) Mailer’s obvious script and the broad, cartoony performances.

The truth is this is probably the number one film of the year for unintentional laughter. That is something to say for it, but it certainly isn’t what anyone was going for.  It is a potential cult favorite, but for all the wrong reasons. Recommended for boozy riffing sessions, DieRy releases today (8/25) on VOD.
Posted by J.B. at 3:00 AM