In the Life of Music: Cambodia’s Most Recent Oscar Submission 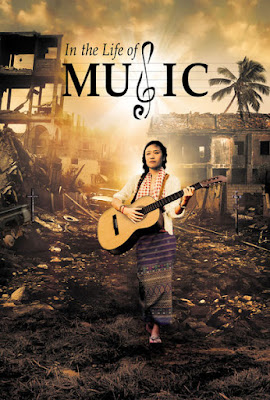 There are many contradictory stories regarding the fate of Sinn Sisamouth during the Cambodian genocide, but as a popular, Western-influenced entertainer, they invariably end with his death. He is almost certainly gone, but his music is not forgotten. In fact, his beloved standard, “Champa Battambang” plays an important role for a rural Cambodian family, before, during, and after the horrors of the killing fields in director-screenwriters Caylee So & Sok Visal’s In the Life of Music, announced to release today on VOD.

Amid the relative calm of 2007, Cambodian-American Hope has returned to her ailing mother’s homeland, to meet and make peace with her Aunt Bo and Uncle Vanny. They are both thrilled to host her. Somehow her mother survived and left them behind, but they cannot blame her for that.

As Hope and Vanny make their way to his provincial village, the film flashes back to 1968, when her parents, Chy and Phally, fell in love during a special summer concert. Their first meeting was a little awkward, but the chemistry was there and the closing performance of “Champa Battambang” totally sealed the deal. Of course, they try to stay together to some extent during the concentration camp horrors of 1976, but it is not easy. Chy is also running a risk befriending Mith, a former songwriter transparently based on Sisamouth. Initially, he is a target for the Khmer Rouge’s contempt, until they decided Angkor needs an inspiring propaganda song, but he might not have the stomach for such a commission.

In the Life is a solid decade spanning family drama performed with great sensitivity by its aptly-cast ensemble. The editing could have been leaner and tighter, but So & Visal definitely convey a vivid sense of a very particularly place, at very distinct times. You can feel the heat and the humidity wafting off the screen. Small World Small Band’s musical numbers, performed as the 1968 traveling band, will also stimulate waves of viewer nostalgia, even if you are unfamiliar with 1960s Cambodian pop music.

As screenwriters and directors, So and Visal do not wallow in the cruelty and madness of the Khmer Rouge’s weaponized class warfare, nor do they minimize or obscure it. Sadly, it is just a fact-of-life, as it was in the 1970s, which the domestic Cambodian audience would be keenly familiar with. This is a delicate film, addressing big themes, like the importance of family and culture, especially during times of great enormity. Recommended for family viewing, In the Life of Music releases today (8/14), on VOD.
Posted by J.B. at 6:00 AM