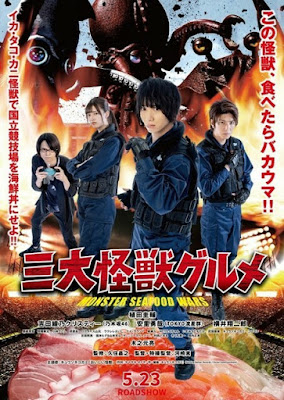 Drawn butter won’t save the world, but maybe weaponized rice vinegar can. The trick will be cracking the crab kaiju’s thick shell. The world is in grave peril, but the giant mutant parts are shockingly tasty in Minoru Kawasaki’s Monster Seafood Wars, which screens as an on-demand selection of the 2020 Fantasia International Film Festival.

Yuta Tanuma is having a bad day. Already fired from the cutting edge, super-growth formula project that he invented, the former scientist is now working at his father’s sushi restaurant. He was supposed to deliver a fresh crab, octopus, and squid as an offering to the neighborhood Buddhist temple, but he is waylaid along the way. The mysterious mugger does not merely steal his seafood. He also doses them with a completed variant of Tanuma’s own unfinished Setap-Z serum.

Fortunately, there was a witness to the crime, so instead of being a suspect, Tanuma is recruited by SMAT, the Seafood Monster Attack Team. They make U.N.C.L.E. sound pretty silly, don’t they? Rather awkwardly, Tanuma is now supposed to work collaboratively with his contemptuous high school crush Nana Hoshiyama, and his well-heeled rival, Hikoma. It is Hikoma who develops the rice vinegar cannons that tenderize Takolla, and Ikalla, the octopus and squid. Unfortunately, Kanilla the crab is a tougher nut to crack. However, it is SMAT’s chef who makes the game-changing discovery when he cooks up some kaiju pieces that came loose during a skirmish.

Basically, if the Ultraman franchise is too serious and sophisticated for your palate, this retro “Suitmation” rubber monster movie might be more your speed. It is definitely Kawaski’s thing. He is also the auteur responsible (if that is the right word) for The World Sinks Except Japan, so if you are looking for any semblance of realism, look elsewhere.

Of course, this is all a jokey lark, rendered with intentionally cheap special effects that make 1960s kaiju movies look like cutting edge technology. Without a doubt, Ryo Kinomoto earns the biggest laughs as SMAT commander Hibiki, with his stone cold, deadpan delivery. You won’t catch him winking at the camera. On the other hand, Keisuke Ueda, Yoshina Ayano Christie, and Yuya Asato manage to be both off-the-charts melodramatic and clumsily wooden, just the way Kawasaki seems to like.

This is another Fantasia on-demand selection that is surely more fun to see with a crowd. However, genre fans will appreciate Kawasaki keeping the kaiju tradition alive, especially since the original story is credited to Eiji Tsuburaya, the original Godzilla and Ultraman special effects wizard. It is totally dumb fun (where the emphasis goes depends on your sense of humor). Recommended for kaiju diehards, Monster Seafood Wars screens as an on-demand selection (geo-locked for Canada) of this year’s Fantasia.
Posted by J.B. at 6:00 AM