Skin: A History of Nudity in the Movies 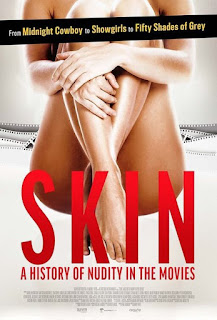 If ever there was a documentary that fully capitalized on the “fair use” principle, this would be it. In some ways, it serves as a fitting companion to definitive genre surveys, like In Search of Darkness and In Search of Last Action Heroes, but it transcends genres, while narrowing its focus. Danny Wolf and his many interview subjects keep track of the naked bits over the history of cinema in Skin: A History of Nudity in the Movies, which releases today on VOD.

Wolf and company go back to the very beginning with Eadweard Muybridge. Ironically, some of the best stuff in the doc, is also some of the earliest, including the Evelyn Nesbit-ish artist’s model Audrey Munson, who starred as a conveniently nude model in 1915’s Inspiration, as well as long-tressed Australian swimmer Annette Kellermann, who swam with just her hair for cover in Fox’s A Daughter of the Gods.

The pre-code is duly appreciated, while the Hays-Production Code is roundly dismissed for its Puritanism, which is like shooting fish in a barrel. We also get a brisk tour through the naughty, naked exploitation films of the 1960s, but this handled with greater depth in American Grindhouse. Yet, perhaps the most familiar passages explain how the appropriation of the X-rated label gave rise to the NC-17 rating.

In terms of icons, a good deal of attention is appropriately given to Marilyn Monroe, Jayne Mansfield, and Mamie Van Doren. Wolf and company also give all due to credit (or whatever) to Roger Corman’s women-in-prison movies, with context provided by Corman veterans, Joe Dante, Pam Grier, Linda Blair, and Sybil Danning. (Frankly, I’ll be very disappointed if I ever visit a women’s prison in the Philippines jungle and the warden doesn’t look like Danning.)

The truth is Wolf and editor Steven L. Austin are quite dexterous balancing serious cinematic sociology with humorous anecdotes. They also stir plenty of 1980s nostalgia with the recollections of Betsy Russell (on Private School), Diane Franklin (on Last American Virgin), and Amy Heckerling (on Fast Times at Ridgemont High). It is also quite remarkable how much of the documented nudity is not sexy at all, like Malcolm McDowell (in Clockwork Orange and Caligula), but he is pretty candid and rather entertaining in his interview segments.

Essentially, Skin is what you think it is, but it is also more thorough and thoughtful than you might expect. Ironically, most viewers will be less fired-up to revisit the films under discussion than they might be after watching the In Search of docs, but they will never be bored by it. Recommended for mostly serious film buffs, so to speak, Skin: A History of Nudity in the Movies releases today (8/18), on VOD platforms.
Posted by J.B. at 3:00 AM