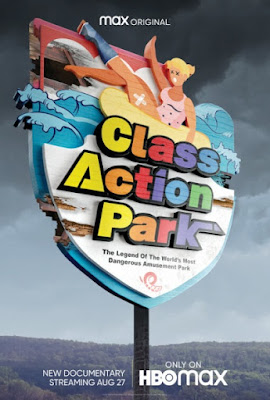 Established in 1978, Action Park was really two parks divided by a highway: Water World and Motor World. You could say it was like Westworld and Futureworld, but more dangerous. Founder Eugene Mulvihill developed the attraction at a time when many thought Vernon, NJ could become the next Vegas. Instead, he turned it into Lord of the Flies. Action Park’s wild rides and wild times are sometimes fondly chronicled in Scott Porges & Chris Charles Scott III’s documentary, Class Action Park, which is currently streaming on HBO Max, closely following its international premiere at the 2020 Fantasia International Film Festival.

Affectionately called Uncle Gene by his under-trained teen employees, former Wall Street wheeler-dealer Mulvihill developed Action Park with capital raised by notorious penny stock pusher Robert Brennan. Trump almost came in on the deal too, but Mulvihill’s cowboy ways were too much for him.

Mulvihill definitely played it fast and loose when it came to safety regulations. To save money, he even fabricated a Cayman-based insurance company to supposedly underwrite the dodgy enterprise. Ironically, one of the bonuses of having a transparently bogus insurance company was it made trial lawyers decidedly unenthusiastic to pursue suits against him. Yet, Mulvihill genuinely seemed to want to provide adrenalized thrills for his visitors, so he routinely pushed the envelop when constructing rides, like the notorious waterslide, the Cannonball Loop.

Actually, all of the rides at Action Park were notorious. The film is filled with colorful survival stories from one attraction after another. Yet, for 1980s Jersey meatheads, unruliness of the park environment and the genuinely dangerous nature of the rides were all part of the appeal. Indeed, there seems to be an endless reservoir of anecdotes from former employees and guests that alternate in tone from disbelief they participated in such lunacy to pride they had the guts to stare death in the face.

Porges & Scott generally strike a nice balance between nostalgia for the craziness and respect for the very real tragedies that occurred there. Less persuasive are attempts to use Action Park as a club to bludgeon the enterprising spirit of the 1980s and Pres. Reagan’s modest attempts to deregulate the over-burdened economy, especially since the film clearly implies Mulvihill had local politicians running interference for him.

Regardless, the doc is briskly entertaining because of the same outrageousness that made the park popular in its heyday. Yes, there should have been far greater adult supervision in just about every aspect of the operation, but there is something to be said for the adventurous spirit of 80s kids. Several interview subjects suggest we hail from the last generation of latch-key kids, who were allowed to grow-up ranging relatively freely through our neighborhoods, which is probably true. The implications to that were good and bad, but at least we developed some backbone and never sat around waiting for a participation medal.

Any film that can help put the unfairly overlooked Generation X into perspective can’t be all bad. Recommended for its deliriously crazy pop culture history, Class Action Park had a special screening at this year’s Fantasia and is now available on HBO Max.
Posted by J.B. at 11:00 PM