Fantasia ’20: The Woman in the Photographs 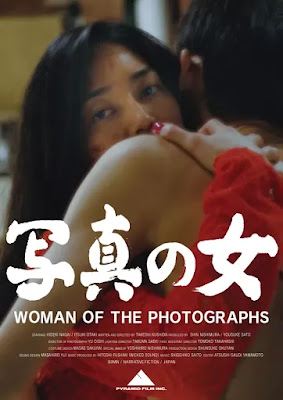 Kai wears white suits like Mr. Roarke on Fantasy Island. As a photo re-touch specialist, he helps his clients project a fantasy version of themselves, despite the contempt he holds for them. Kyoko wears red shoes like Dorothy in The Wizard of Oz. She would rather live in the fantasy she projects to her online followers, but the scar on her chest is a constant reminder of reality. They are either perfectly matched and totally ill-suited to each other. It is hard for them to tell throughout Takeshi Kushida’s The Woman in the Photographs, which screens as an on-demand selection of the 2020 Fantasia International FilmFestival.

The digital revolution was not kind to neighborhood photo studios, but Kai still ekes out a living. His primary clients are Saijo, the neighboring mortician, who often needs a respectable ceremonial pictures photoshopped from more causal photos, and unmarried women in need of touched-up photos for their match-making services. He meets Kyoko by chance when an ambitious selfie attempt goes awry. Kai helps her get the shot and then erases her scars.

Kai has never been comfortable around women, partly because his mother died in childbirth, so he is more annoyed than excited when Kyoko crashes in his small flat attached to the shop. However, when Saijo suggests letting her stay, at least until she is back on her feet, Kai passively agrees. As they spend time together, Kyoko starts to rebuild her followers, with the help of his skills, but he also encourages her darker, more self-destructive instincts, though their strange gamesmanship.

In fact, Kyoko vividly proves narcissism and self-loathing are not mutually exclusive. She and Kai offer up extensive grist psychological analysis, both separately and together as an undefinable couple. This is a film that will make viewers deeply uncomfortable, but there are also moments that will brings tears to your eyes.

As it happens, Toshiaki Inomata delivers some of the most poignant moments as Saijo. It is the sort of surprising supporting turn that can completely alter perceptions of the film. He really is that good. The leads are also quite accomplished, in trickier parts that have considerably less claim to viewer sympathy. As Kai, stage thesp Hideki Nagai hardly utters an audible word, but when he does, it is heavy. Itsuki Otaki’s performance as Kyoko is also quite brave, in a physically exposed way. There is little explicit sex or nudity, but she often puts herself scarred body on display, for a voyeuristic effect.

Stylistically, Kushida totally goes for broke, utilizing an exaggerated sound mix and some decidedly trippy visuals. Arguably, the film might have had even greater emotional resonance if he had toned down the third act somewhat, but it is still exiting to see a filmmaker truly swing for the fences with his first feature. A little less might have been a little more, but the raw talent is still plainly evident to see. Very highly recommended for adventurous viewers, The Woman in the Photographs screens as an on-demand selection (geo-locked for Canada) of this year’s Fantasia.
Posted by J.B. at 3:00 AM