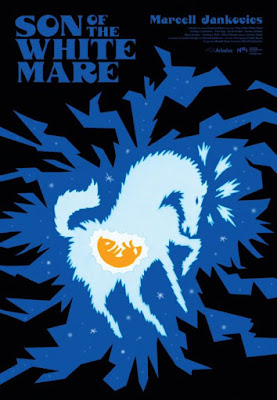 If Peter Max had painted Conan book covers instead of Frank Franzetta, they might have looked a lot like this film. They also would have confused the target audience. Marcell Jankovics set out to adapt several Magyar, Scythian, and Avarian folk myths, but the demands of Hungarian censors forced him to make strange alterations long the way. Yet, the resulting film was one of the most singularly auteurist animated film of its era. Its trippiness remains undiminished, as viewers can see when Marcell Jankovics’ newly restored Son of the White Mare opens virtually this Friday.

Technically, Fanyuvo (who will become known as “Tree-Shaker”) is the third son of the White Mare. As in Greek mythology, we probably really should not dwell on the implied human-animal interactions in this world. We do know Tree-Shaker gained his tree-shaking strength for his mother’s milk. After her death, Tree-Shaker sets off on a quest, like any reputable fantasy hero, to defeat three dragons, who are holding three Princesses captive in the underworld.

To help him, Tree-Shaker recruits two brawny sworn-brothers, Stone-Crumbler and Irontemperer. However, Tree-Shaker does most of the heavy lifting. Frankly, Crumbler and Temperer fail him at an alarming rate, but on the other hand, they sullenly put up with show-off behavior (they even endure weird spanking scenes).

White Mare is the sort of film that can never be fairly represented in synopsis form. You really have to see it to get it. It is much more about Jankovics’ swirling colors than the narrative blow-by-blow. Visually, it is indeed a trip. Frankly, it is rather surprising the Communist censors allowed so much openly sexual imagery, including the topless Princesses. There is also an awful lot of symbolism to unpack, especially if you are up on your Slavic folklore.

On the other hand, the characterization is decidedly flat, but that sort of goes with Jankovics’ archetypal approach. Arguably, Fanyuvo is not supposed to be particularly complex and multi-faceted, because he is Tree-Shaker, the Son of the White Mare (read that in your mind’s best Masters of the Universe voice).

In fact, White Mare becomes a richer viewing experience with the more you know about Jankovics and his personal ideology, especially his pessimism regarding urbanization and technological “progress.” Regardless, anyone who values the art of animation should be happy to see the film finally get a coordinated American release. Not surprisingly, the film always had a greater following outside of Hungary. In this case, the state did not censor it outright. They just let it die without proper distribution and promotional support. (Whereas, the Hungarian Film Archive is now totally on-board restoring the films of Jankovics and other great Hungarian filmmakers.) Recommended for sophisticated animation fans, Son of the White Mare opens virtually this Friday (8/21).
Posted by J.B. at 6:00 AM