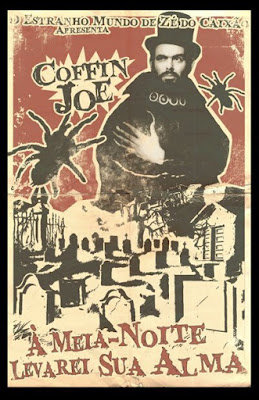 If his funereal top hat and cape were not enough to make you suspect Ze do Caixao, a.k.a. “Coffin Joe,” was capable of some serious villainy, his devilish beard and long creepy finger nails should have been a dead giveaway. He was the sinister anti-hero of Brazil’s first horror movie, who became an international horror icon. In tribute to Jose Mojica Marins, the man who created and portrayed Coffin Joe, three of his most notorious favorites are screening as on-demand selections of the 2020 Fantasia International Film Festival, including the original, At Midnight I’ll Take Your Soul.

Coffin Joe is the undertaker of a small post-war Brazilian town, who always makes sure he has a steady stream of business. He does not look particularly imposing, but he terrorizes his neighbors through the sheer sinister force of his will. (In subsequent films, we also learn he is uncannily hard to kill.) He is legally married, but he is openly scornful of his barren wife (and the passive-aggressive hostility is mutual). Obsessed with the idea of reproducing his “superior” bloodline, Coffin Joe covets Terezinha, the fiancée of Antonio, who happens to be the only villager that considers him a friend (like that matters to Ze).

When Antonio invites old Joe to visit a Roma fortune-teller, the villainous undertaker plans to murder him afterward. Of course, the old crone (very much in the tradition of Maleva in the old Universal monster movies) can see Coffin Joe’s intentions and foretells his eventual doom. Naturally, this just makes Ze scoff in her face. However, Coffin Joe will not be laughing so hard when things start to take a supernatural turn during the third act, which will indeed culminate at midnight.

Frankly, it blows the mind to think a film this twisted was let loose upon the world in 1964, the year of saccharine songs like “Chapel of Love” and “People [Who Need People].” It isn’t the just the brutality of CJ’s murders, but also the militant vehemence of his philosophical nihilism. He definitely thinks he is a superman (in the Nietzschean sense), so he has no qualms about acting accordingly. Yet, the film itself is ultra-atmospheric, rendered by cinematographer Giorgio Attili in a super-spooky black-and-white. In terms of look, it is a lot like dreamy vintage Val Lewton, but thematically, Midnight can hang with the New French Extremity.

As the legends goes, director-co-screenwriter Marins only took on the role of Coffin Joe when the actor he originally cast got cold feet. It was truly his fate, because Marins’ malevolent charisma radiates off the screen and would define the rest of his life. Although relatively small in stature, Marins dominates the film with his intense focus, ferocious sadism, and defiant contempt of traditional values. Over the years, Marins employed his Coffin Joe persona to attack the hypercritical morality of the military junta, but his misanthropic ethos can be found in its purest distillation in Midnight. Plus, there is plenty of creeping around graveyards and other old school horror movie stuff.

It is easy to see Coffin Joe as a precursor to Freddy Krueger and scores of other horror villains. Yet, it wasn’t just the killing that made him so evil—it was the way he rubbed everyone’s nose in it. Honestly, the first Coffin Joe remains largely in a class by itself and it has not lost any of its bite. Very highly recommended, At Midnight I’ll Take Your Soul screens as an on-demand Coffin Joe tribute selection of this year’s Fantasia.
Posted by J.B. at 3:00 AM