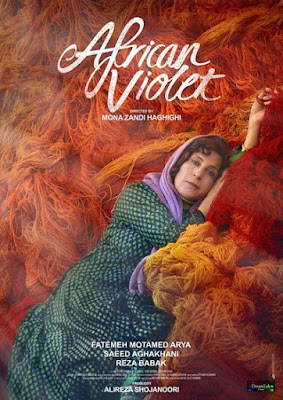 If you have seen Asghar Farhadi’s A Separation, you understand difficult it must have been for Shokoo to divorce her first husband Fereydoun. A year later she married one of his friends, the considerably younger Reza. That is a lot of awkward history, yet Shokoo and Reza agree to take Fereydoun into their own home, after his children shunt him off to a nursing home. It will be difficult, but there are times when three’s company in Mona Zandi Haghighi’s African Violet, which opens virtually today.

There is so much that is implied, but left unsaid regarding Shokoo’s marriage to Fereydoun. Clearly, he was much older than she was. We can probably assume the union was not her idea. Yet, for fifteen years, they worked in concert to raise their children. It still didn’t work out. For years after their split, Fereydoun blamed Shokoo for running away with his best friend, but that really wasn’t fair. Regardless, their children inevitably took his side. Yet, Shokoo is still so grateful for his dedication as a father, she offers to care for him.

We can well understand Reza’s initial reluctance, but Shokoo cajoles him into agreement. After all, he has history with Fereydoun too. Despite resenting the old man’s presence, Reza also feels sorry for him. All three have conflicting feelings about each other, but the strange equilibrium that almost settles in will be disrupted by outsiders.

On the surface (and the next few levels down), African Violet is a quiet but keenly observed domestic drama. However, as you unpeel the layers, you start to confront the inherent inequities of Iranian society buried within. Clearly, Fereydoun’s union with Shokoo was not based on equal terms. Since she divorced and remarried, she is considered a scandalous woman by many, including her own family. Plus, it is rather ridiculous to see a brief scene of Shokoo and Reza laying in separate beds (in the same bed room), like Rob and Laura in The Dick Van Dyke Show, but that presumably says more about the Iranian production code than their marriage.

Yet again, African Violet demonstrates Iranian filmmakers’ remarkable comparative advantage for the domestic drama genre. Arguably, the Japanese film industry is their closest competitor in this respect. To this end, Haghighi coaches wonderfully subtle and understated performances from all three of her principals, while maintaining a palpable sense of compounded sadness.

Fatemah Motamed-Aria (probably the best-known in the ensemble) portrays Shokoo as an admirably forceful and compassionate woman, but she can also be a bit tone-deaf and headstrong. It is a complicated portrait, nicely complimented by Reza Babak as the sorrowful but dignified Fereydoun and Saeed Aghakhani as Reza, who is faithful in his love for Shokoo, but somewhat wounded in his pride.

This is a deceptively simple film, elegantly executed by Haghighi and performed with great sensitivity. The tightly disciplined drama is perfectly underscored by Peyman Yazdanian’s delicate music. Highly recommended for thoughtful, grown-up audiences, African Violet opens virtually today (8/21).
Posted by J.B. at 3:00 AM