Apocalypse ’45: The War Against Japanese Militarism 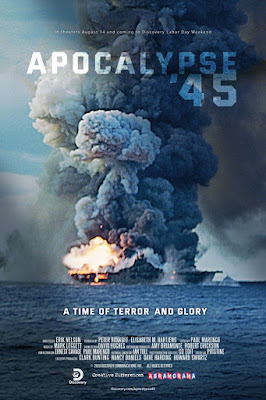 If you think films produced by the U.S. military during WWII were merely “jingoistic” propaganda, you haven’t seen very many. Yes, films like With the Marines at Tarawa agreed an American victory was critically important, but they did not white-wash the harsh realities of battle. They also reflect a concern for documenting history that led to the dispatch of numerous military film crews. It turns out there was still more unseen footage of the war in the Pacific awaiting discovery in the National Archives, which film restoration specialist Ernest Savage and editor Paul Marengo digitally “cleaned up” and integrated into Erik Nelson’s documentary, Apocalypse ’45, opening virtually tomorrow (ahead of its premiere on the Discovery Channel).

“Apocalypse” is a strong word, but the destruction documented in this film is stark, even by our current jaded standards. It starts with footage shot during the aftermath of Pearl Harbor, by the great John Ford (whose war-time filmmaking activities were nicely covered in the documentary, Five Came Back), and ends with the Hiroshima’s post-atomic landscape. However, it is worth noting the latter footage was filmed by American servicemen providing medical treatment to Japanese survivors.

The rediscovered and restored archival footage is accompanied by the oral history of twenty-four surviving American combat veterans, including the centenarian Lt. Col. Thomas Vaucher and Corporal Hershal “Woody” Williams, the last surviving Congressional Medal of Honor recipient from Iwo Jima. Despite their advanced years, they still recall the events in question with vivid clarity.

Of course, the significance of Hiroshima hangs over the film, but Nelson and company handle it with unusual thoughtfulness. Throughout the film, they thoroughly explain Imperial militarist regime’s celebration of sacrifice and death, clearly establishing the extent to which they weaponized the civilian population. Every man, woman, and child were expected to fight the anticipated American invasion, literally to the death. The compounded horror could well have been worse than the two atomic bombs (and without them, you might not be reading this review right now).

Regardless, the Pacific theater is often overlooked in favor of the European action, but it was arguably much deadlier and far harsher to endure. Apocalypse ’45 helps put the war against Imperial Japanese militarism into perspective (while also reminding us how late the Soviets came to the party, only declaring war on Japan on August 8, 1945). The footage of Pearl Harbor, Iwo, and Okinawa are all quite powerful, but maybe some of the most stunning images are those of kamikaze pilots crashing into U.S. carriers and warships.

It is hard to imagine how today’s media would cover a battle like Iwo Jima, in which 6,800 U.S. servicemen died to claim an empty, barren island. The headlines might read: “FDR sends thousands to their death—for what?” Well, for victory. Fighting wars is never pretty, but sometimes it is necessary. Fittingly, Nelson closes the film giving his interview subjects credit and thanks for doing what had to be done. Very highly recommended, Apocalypse ’45 opens virtually tomorrow (8/14) and airs 9/5 on Discovery.
Posted by J.B. at 6:00 AM