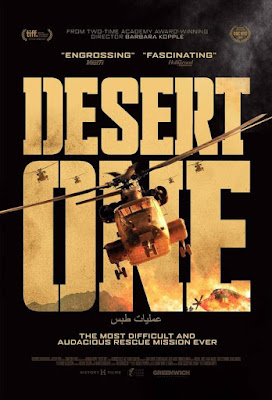 The U.S. Army’s Delta Force is feared and respected around the world, yet their first mission that most people ever heard of was a tragic disaster. That was Operation Eagle Claw, the aborted attempt to rescue the American embassy personnel held hostage in Iran. The mission was briefly depicted in the opening of the 1980s action classic, The Delta Force, but it deserves a more serious film treatment. That can sometimes be found in Barbara Kopple’s documentary Desert One, which opens virtually and in select brick-and-mortar cinemas tomorrow.

The 444-day Hostage Crisis was a constant demoralizing drumbeat that surely contributed to Jimmy Carter’s loss. Clearly, it was an unprecedented act of state-endorsed aggression, but as Ted Koppel (whose career at Nightline was made by the Hostage Crisis) notes on-camera, Carter hamstrung himself by unilaterally removing most of his options from the table. Essentially, he almost exclusively pursued a diplomatic resolution with an extremist regime already engaging in illegal behavior, that did not want to talk to him or his surrogates. In retrospect, the hostages Kopple interviews agree it was a worthy attempt, as did candidate Reagan at the time. Unfortunately, it failed.

The surviving veterans of Operation Eagle Claw go through the timeline of what happened and how it went wrong. At least one of the former Special Operators admitted he was skeptical of the plan, right from the start, but he followed his orders anyway, to serve his country and support his brothers-in-arms. In a particularly frustrating turn of events, the casualties occurred during the withdrawal from the “Desert One” rendezvous point, after Carter had already aborted the mission. Clearly, flawed intelligence and insufficient preparations for the desert conditions were contributing factors, but the film largely ascribes the incident to the “fog of war.”

It is satisfying and frankly rather overdue to see the veterans of Operation Eagle Claw finally get recognition for their service and courage. Conversely, it is sickening to watch the Ayatollah’s student captors gleefully reveling in the deaths of American servicemen and the general success of their hostage taking. By any standard of international law, it was completely illegal act of terror, but Kopple’s Iranian colleagues passively let them chortle away, unchallenged. She would never interview someone in the Trump administration in such a manner, so shame on her.

Still, it is impressive to see how the Special Operators took care of their own, providing full-ride scholarships to the children of their colleagues who died at Desert One. Yet, the missing piece is the lessons that were learned and applied after the failed rescue attempt. The time devoted to the “October Surprise” conspiracy theory is also a considerable editorial mistake, especially since those trafficking in it admit they have absolutely no proof of anything.

There is very good stuff in Desert One, but there are also highly politicized passages that undermine the film’s integrity. It is frustrating, because younger Americans really ought to have a better understanding of Iran’s criminal hostage-taking and subsequent state-sponsored terrorism, to fully comprehend the destabilizing role the regime has played in the Middle East. Drew Taylor & Weinstein’s Our Man in Tehran is a far superior documentary on a related topic. Earning a highly conflicted reaction, Desert One opens tomorrow (8/21) virtually (and in some cases physically).
Posted by J.B. at 6:00 AM