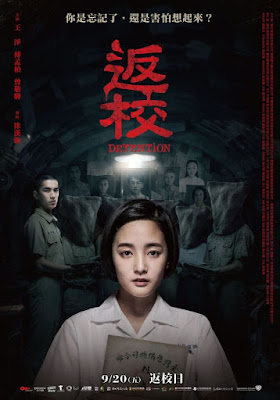 During Taiwan’s “White Terror,” the KMT ruled over a one-party authoritarian regime. Despite formerly professing an anti-communist ideology, the KMT is now well-known as the Taiwanese political party most closely-aligned with Beijing and opposed to formal independence. You would think the Taiwanese would stop voting for the KMT—and they have. Pres. Tsai Ing-wen overwhelmingly defeated KMT candidate Han Kuo-yu, who was subsequently turned out of his mayoral office in a decisive recall election. Such election results would please the students in Wei Chong-ting, if they could live to see them. Tragically, it appears most of them are trapped in purgatory, as a result of the torture they endure in John Hsu’s Detention, which screened at this year’s Fantasia International Film Festival.

The popular Mr. Chang and the very serious Miss Yin both supply books and guidance to Wei’s underground book club. Not surprisingly, a “model student” like Fang Ray-shin is not a member. Since her father is a high-ranking officer, she is about the only student who is not constantly under the microscope of Instructor Bai, the school’s military advisor. Yet, it is Chang whom Fang pines for.

Clearly, someone informed on the group, leading to disastrous consequences for them all, but Fang’s involvement is not exactly clear, even though she seems to share a similar fate as the others. She and Wei must figure it out together, when they suddenly awake in a surreal, nightmarish version of their school.

It is probably safe to say Detention is the best film based on a video game produced so far and most likely superior to any that might come in the future. Adapted from the horror adventure game of the same title, Detention is deeply steeped in Taiwanese history and also considerably informed by Buddhist teachings. Yet, the imagery is old school supernatural horror, all the way.

Gingle Wang is terrific as the vulnerable and confused Fang, proving you can indeed find great performances in horror movies (some of us knew it all along). Fu Meng-po plays Mr. Chang with great compassion and humanity, without descending into “To Sir with Love” clichés. Likewise, Cecilia Choi fully humanizes the more emotionally distant Miss Yin. Tseng Ching-hua is certainly convincingly beat-up, baffled, and terrified as young Wei, but Yun Chung-yueh really drives home the payoff as the older, epilogue Wei.

Taiwan is a great sovereign nation, because they made the conscious decision to change from an autocratic regime to a democracy with rule of law. That is exactly why the CCP is so desperate to keep them isolated and marginalized. In a further contrast, Taiwan’s artists obviously feel safe in confronting their nation’s dark past in work like Detention. It is indeed a compelling act of remembrance, but it is also profoundly scary. Highly recommended for horror fans, as well as admirers of mind-bending films like The Cell, Detention had its Canadian premiere when it screened at this year’s Fantasia.
Posted by J.B. at 3:00 AM