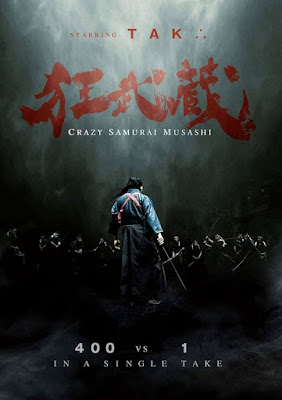 Miyamoto Musashi was an epic figure. He was the subject of Hiroshi Inagaki’s Samurai Trilogy (staring Toshiro Mifune) and it took Tomu Uchida six films to do justice to his story. However, Musashi liked to keep things simple. His classic strategy treatise The Book of Five Rings usually runs under 200 pages, in translation. The latest cinematic treatment Musashi is both simple and epic. The illustrious swordsman will slice through 588 opponents during one long, continuous take in director-fight choreographer Yuji Shimomura’s Crazy Samurai Musashi, which screens as an on-demand selection of the 2020 Fantasia International Film Festival.

Previously, Musashi killed the patriarch of the Yoshioka clan, so they challenged him to a duel that is really an ambush. In addition to the clan’s loyal members and retainers, 300 mercenaries lay in wait for him. Clearly, the Yoshioka’s plan will not work out as they hope, but on the bright side, Musashi will save them a fortune in mercenaries’ wages.

Thusly begins a non-stop, uncut battle between Musashi and hundreds of opponents. There is not a heck of a lot of dialogue, but the screenplay is still credited to the one and only Sion Sono. You could almost call overkill, but in a way, the rhythmic waves of attacks become almost soothing, like the relaxion videos of the ocean tide. However, as Musashi and lead actor Tak Sakaguchi start to logically tire, Crazy Samurai becomes a legitimate performance piece. The sight of Musashi defiantly chopping down the numerically superior forces as he staggers about is truly arresting.

Fortunately for Musashi, the Yoshioka have an unfortunate habit of charging with their swords held over their heads, leaving their mid-sections conveniently exposed. It is not a winning move. Likewise, their refusal to attack from behind (perhaps a reflection of the Samurai’s Bushido code) certainly works in Musashi’s favor. Of course, practicality demands Shimomura pitch Musashi plenty of fat fastballs over the plate, so he can make it through this marathon melee.

Regardless, this truly is a performance feat on Sakaguchi’s part. Things get to the point that you can feel your own lungs heaving just watching him. His Musashi is a seriously bad cat, but he comes across on-screen as a flesh-and-blood mortal rather than a super-hero.

It is easy to envision Japanese stuntmen bragging about how many times they were killed in Crazy Samurai Musashi. Too bad live screenings are a trickier proposition for this year’s Fantasia, because it would be a riot to watch this film with a boisterous crowd, trying to count each and every kill. If you are looking for some impressive mayhem, grab a hot cup of Nong Shim noodles and settle down to enjoy Crazy Samurai Musashi, screening as an on-demand selection (geo-locked for Canada) of this year’s Fantasia.
Posted by J.B. at 6:00 AM