Fantasia ’20: The Weather is Lovely (short) 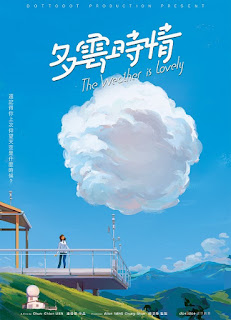 It turns out we can even blame millennials for bad weather. In this case, the irresponsible party is Claude, a rookie cloud-maker. When he drops his cloud-maker, it causes a potentially apocalyptic storm in Lien Chun-chien’s charming animated short film, The Weather is Lovely, which screened at the 2020 Fantasia International Film Festival.

Claude is a bit of a careless goof-off. The same cannot be said of Yin, the diligent young meteorologist conducting research in the observatory below him. When Claude’s device shorts out, it releases a thunderous cyclone. Although Claude tries to remain out of site, he will need her cooperation to avert catastrophe as the storm gains in size and severity. He will also have to cowboy up.

Visually, Weather is indeed a lovely sight that bears comparison to vintage Studio Ghibli studio films (particularly The Wind Rises, given some thematic similarities). There is a mildly steampunky vibe to the film’s tech, but Claude’s cloud conveyance also has an old school sci-fi aesthetic, in the tradition of The Rocketeer. It is also appealing to see two STEMmy young people working together and developing a romantic affinity (naturally enough).

Lien’s animation is joyously colorful and energetic. Plus, Simon Whitfield’s score is upbeat and at times, downright swinging. Thirteen minutes is more than enough to convince viewers we could use a full feature set in this world—or whatever else Lien might have in mind.

The imagery is so striking, Lien could easily sell prints after each screening. It looks and sounds terrific. Without a doubt, this is one of the best animated shorts of the year. Very highly recommended, The Weather is Lovely screened at this year’s Fantasia.