Fantasia ’20: A Mermaid in Paris 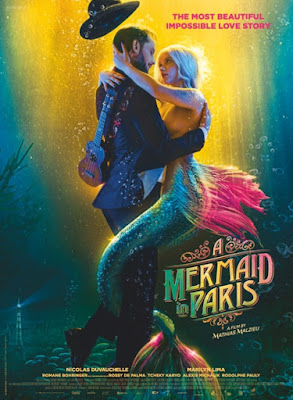 Sailors know. There is a reason the old salts fear mermaids and sirens, because they really are out to get men. Lula assumes Gaspard Snow will be her latest victim, but the retro-crooner is weirdly immune to her siren song. Yet, she starts to fear for the broken-hearted entertainer’s life as cares for the beached creature in Mathias Malzieu’s A Mermaid in Paris, which screened during the 2020 Fantasia International Film Festival.

Snow would have been happier in the past, so he tries his best to live there. He and his father operate a secret nightclub in the lower deck of a houseboat that was founded by his grandmother and her associates, the Surprisers. During the National Socialist occupation, the Surprisers were an underground resistance cell, who also raised the city’s spirits by leaving whimsical toys on the street for children. Snow tries to keep their spirit alive, but that kind of chanson-elan is not widely appreciated these days.

After a late-night set, he finds Lula washed up on the river bank, with a clearly injured tail fin. The hospital refuses to examine her without a national insurance card, so he takes her back to his bath tub instead. Lula is amazed he can function at all, because her song has left several bewitched men ailing in their wake. She is even more impressed when he is still hail and hearty the next day. According to Snow, his last love affair left him heartbroken and immune to love. Lula is sort of happy to hear that, because she is starting to feel something for him.

Mermaid in Paris sounds like a conventional fish-out-of-water rom-com (which Lula literally is), but Malzieu’s visual approach is endlessly inventive. After seeing this film, it is clear he is the perfect director to tackle a film version of The Drowsy Chaperone. Best known for the animated Jack and the Cuckoo Clock Heart, Malzieu occasionally incorporates animation into Mermaid, but he really shows a knack for letting visual set pieces unfold before our eyes.

Nicolas Duvauchelle is simultaneously slick and charming as Snow. He also nicely plays off Tcheky Karyo, who himself is largely playing against his usual type as Snow’s loving hipster father. Frankly, Marilyn Lima is a bit boring and bland as Lula, but everyone else helps carry her. That particularly includes Almodovar regular Rossy de Palma taking a diva turn as her namesake Rossy, Snow’s nosy opera-singer next-door-neighbor (and former Surpriser).

In terms of tone, Mermaid in Paris falls somewhere between Ron Howard’s Splash and Agnieszka Smoczynska’s The Lure. It can’t surpass either of those classics, but it is light years superior to Stephen Chow’s The Mermaid and even Robert Egger’s good-but-not-knockout The Lighthouse. Yet, Malzieu’s mermaid film could possibly be the most stylish of the bunch. Recommended for fans of fantasy with “panache,” A Mermaid in Paris had its North American premiere at this year’s Fantasia.
Posted by J.B. at 6:45 AM