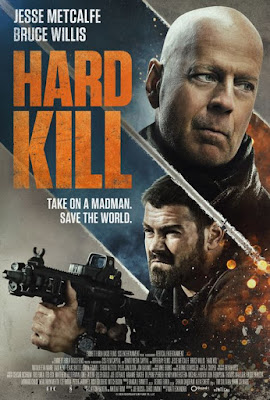 Think of this as a more down-to-earth, action-driven take on the themes of Sneakers. A military contractor’s Social Justice Warrior daughter developed a super-AI that she hoped could run the world in a more equitable manner. The board just wanted to sell it to the military. Instead, she tried to give it to a terrorist preaching the gospel of class warfare. Obviously, that was a huge mistake. Now a small team of mercenaries must protect the magnate and his fail safe, while hopefully rescuing his daughter in Matt Eskandari’s Hard Kill, which releases tomorrow on VOD.

For reasons that never make much sense, Chalmers and Fox, his chief security executive, have made the assignment perversely difficult for Miller’s team. The idea, such as it is, was to hole-up in an extremely vulnerable abandoned factory, knowing the terrorists would attack with superior firepower and numbers. Miller knows their leader well. The extreme socialist egalitarian now known as “The Pardoner” (a sly Chaucer reference, probably the smartest part of the film), nearly killed him years ago with a cowardly bullet to the back.

Fortunately, Chalmers’ daughter Ava now recognizes what a violent megalomaniac the Pardoner always has been. She will definitely throw her lot in with Chalmers and Millers’ motley mercs, if she gets a chance. However, keeping Chalmers and the code in his safe is of paramount importance.

Hard Kill is definitely another Bruno-Pack VOD production. It is helmed by Eskandari, who previously directed Bruce Willis in Survive the Night and Trauma Center, and also features Texas Battle (as Fox), who co-starred in Trauma Center, 10 Minutes Gone, and Marauders. The truth is Willis and Battle have a slick professionalism that well serves an unpretentious action film like this.

In contrast, both Jesse Metcalfe and Sergio Rizzuto are blahly bland as Miller and the Pardoner. That is particularly problematic in the case of the Pardoner, considering all the fiery Bernie Sanders-from-Hell rhetoric screenwriters Chris Lamont and Joe Russo give him. A villain with more sinister presence really could have made this movie something, but instead it is just another VOD release from Willis and company.

Indeed, the action sequences are pretty well executed, especially those featuring former pro-wrestler Natalie Eva Marie. Frankly, she should have been leading the team instead of Metcalfe. Likewise, Jacquie Nguyen makes a stronger impression than Rizzuto as Emma, the tech-savvy terrorist, who gets cold feet.

Hard Kill is right about one thing. Destroying the world isn’t revolutionary activism, its nihilistic terrorism. This isn’t Willis’s best work, but he still has his action cred and dependable watchability. Alas, this could have been something bigger and better, if the villain had been more flamboyant. Recommended as a time-killer when it hits streaming services, Hard Kill releases tomorrow (8/25), on VOD.
Posted by J.B. at 3:00 AM