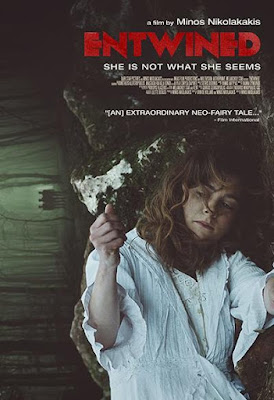 What’s Greek for “you aren’t from around here, are you?” Their diet might be Mediterranean, but Dr. Panos’s new village neighbors are as superstitious and wary of outsiders as hardscrabble Appalachians. He expects to be busy as the first ever doctor in town, but it turns out the only one he will have to save is himself in Minos Nikolakakis’s Entwined, which releases virtually today.

His father’s death from cancer left Panos’s faith in medicine shaken, so he takes a Joel Fleischman posting in a quaint mountain community, expecting it to boost his confidence. However, his arrival is met with indifference bordering on contempt. When Panos has a chance encounter with the reclusive Danae, he thinks he has finally found someone he can rescue. He figures he can treat the strange bark-like rash on her shoulder with standard drugs and deliver her from the weird old man, whom he presumes is her sexually abusive father.

However, once he spends a night with Danae, the forest will not let him leave. We can immediately see she is some kind of pagan variant on the succubus archetype, but Panos is literally bewitched. Meanwhile, only his exasperated half-brother George seems to be concerned about his whereabouts.

Entwined is a hard film to get a handle on, because it combines the aesthetics of Catherine Breillat’s adult fairy tale films (like Bluebeard and The Sleeping Beauty) with the New Greek Weird Wave. It never really works as folk horror film, because Nikolakakis keeps both the emotions and the genre elements at arm’s length. We are also always several plot points ahead of poor, bedazzled Panos, which inevitably leads to audience impatience.

Still, it is easy to admire Nikolakakis’s command of imagery and mood. Despite a shared woodsiness, Entwined is much more accessible than Woodshock (a low bar to clear) and Thodoros Mihopoulos’s cinematography is often quite arresting. Yet, viewers are likely to share an ironic sense of solidarity with Panos, because they too will feel like they are trapped in this forest cottage. Both Prometheus Aleifer and screenwriter John De Holland are solidly engaging as Panos and George, but Anastasia Rafaella Konidi never generates either the seductive heat or the malevolent intensity a demonic forest entity ought to display.

Entwined looks impressive, but Nikolakakis was perversely determined to keep most genre viewers dissatisfied. In addition to the slow pace and cold, distant tone, some of the third act developments just sort of happen without clearly established causes. Its ambition earns respect, but we can’t recommend the execution of Entwined, which releases virtually today (8/28) in select markets.
Posted by J.B. at 6:00 AM