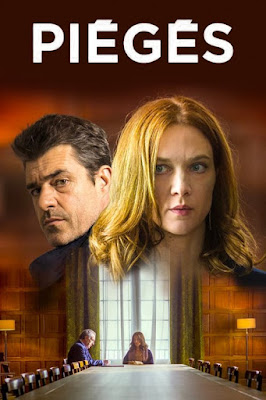 Elsa Aubry is about to receive an Indecent Proposal, but it won’t jeopardize her marriage—just her soul. Some unknown benefactor will offer her one million Euros, ostensibly as an inheritance, if she simply kills someone, who supposedly really deserves it. The dedicated wife and mother is not a murderer, but she desperately needs the money. Of course, the offer is also not as straight-forward as it is initially presented in creator-co-writer Chris Lang’s two-part French drama Pieges, which premieres tomorrow on MHz Choice.

Clearly, murder is not an enforceable contract item, but the lawyer Dugard maintains willful ignorance. He merely schedules a meeting with Aubry and gives her a flashdrive with a video file to be watched in his absence. If she refuses, Aubry still pockets 5,000 Euros for her troubles. However, if she returns in three days, she will learn who she must kill and when.

Aubry’s first instincts were to go to the police. However, her husband Marc convinces her to at least take the 5K. They are already struggling to make ends meet, even before her Leukemia-survivor daughter Zoe suddenly suffers a relapse. Ordinarily, Aubry would never entertain such an offer, but when Zoe’s only hope is an experimental treatment in Chicago not covered by insurance, Marc is willing to consider it for her.

The format of Pieges is relatively unusual these days, consisting of two hour-long installments, but it divides quite evenly, both in terms of narrative break and emotional tone. In fact, Pieges is quite effective and compelling, because Lang and co-writers Julien Teisseire, Claire Lemarechal, and Simon Jablonka go micro rather than macro when they reveal the truth behind the secret conspiracy. Instead of an international internet cabal, what is going on is actually deeply personal.

The likable and sympathetic Aubry family dynamics further raise the stakes. It is rather notable and refreshing that Marc is Aubry’s second husband, but Zoe fully accepts him as her father figure. As a result, we can credibly accept any decision they might and still root for them.

Odile Vuillemin is pretty believably freaked out and overwhelmed as Aubry. She also develops some appealingly familiar chemistry with Thierry Neuvic’s Marc. Audrey Hall is a bit annoying as Zoe, but she is a teenager, after all. As a bonus, the crafty veteran Philippe Magnan adds some sinister elitist color as Dugard, the lawyer with plausible deniability.

MHz continues to find some of the best European mysteries and crime dramas. Pieges definitely fits their viewers’ editorial preferences. In this case, the overall feature-length gives sufficient time for character development, but the two-part structure breaks it up into easy pieces for busy viewers. Highly recommended for fans of domestic thrillers, Pieges starts streaming tomorrow (9/1) on MHz Choice.
Posted by J.B. at 6:00 AM