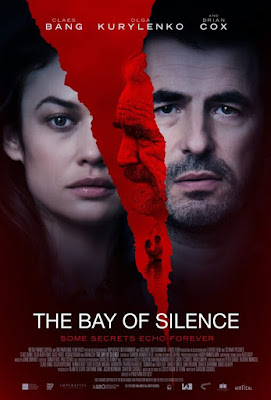 An artistic, jet-setting childhood sounds like fun, but it messed up art-photographer Rosalind Pallisher pretty deeply. Unfortunately, Will Walsh did not realize that until after the birth of their infant son. Tragedy will stretch their marriage to the breaking point in Paula van der Oest’s The Bay of Sillence, which releases on VOD this Friday.

It was a whirlwind romance that culminates in the titular Italian body of water. Both are happy when pregnancy quickly follows, but a freak accident precipitates a premature delivery and a persistent case of postpartum depression. Milton Hunter, her gallerist and former step-father, assures Walsh everything is fine until Pallisher suddenly disappears with their infant son and her twin daughters from a previous relationship.

Sadly, when Walsh finally tracks down Pallisher, he finds their son is dead. She is the obvious suspect, but he also harbors suspicions regarding the missing nanny. He also learns his wife had a history of depression and schizophrenia from her mother, who suddenly reappears back in her life.

Presumably, Lisa St. Aubin de Teran’s source novel derives Du Maurier-esque suspense from the family angst and melodrama, but it just doesn’t translate to the screen here. Screenwriter Caroline Goodall and van der Oest spend a full thirty minutes on exposition and set-up, building towards the death of an infant, which they then keeping rubbing in the audience’s nose. Seriously, there is no finesse when it comes to that awkward plot turn.

In fact, Bay holds very few surprises as a thriller, because the supposedly mystery villain practically looks directly into the camera and tells the audience not to trust him. Frankly, there is so much telegraphing in this movie, it should be sponsored by Western Union.

Claes Bang is not bad as Walsh, but it is hard to believe how long it takes him to figure out the glaringly obvious. Olga Kurylenko is convincingly twitchy and disturbed as Pallisher, but it is not exactly an empowering role. Brian Cox is one of the best thesps in the business, but Hunter is just a dull, underwhelming cliché.

This is a real disappointment from van der Oest, the Oscar-nominated Dutch filmmaker, who has previously helmed some fine English-language films, like Black Butterflies. It is just too obvious to work as a thriller and too down-beat to be much fun. Not recommended, The Bay of Silence opens this Friday (8/14), on VOD.
Posted by J.B. at 6:00 AM