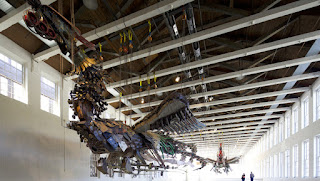 China should thank Taiwan for being such a good neighbor, but that is unlikely to happen. The ROC provides a shining example of a former authoritarian government that has successfully transitioned into a democracy. Less conspicuously, but still quite significantly, it was a Taiwanese mogul who funded the completion of an enormously ambitious work of Chinese contemporary art. Producer-director Daniel Traub documents the artist and the very public work during several on-site installations in the short documentary, Xuu Bing: Phoenix, which premieres this Friday on OVID.tv.

Xu Bing is globally recognized as an important living and collectible artist, so he had the cache necessary for a commission like the Beijing Central Business District Atrium. Ordinarily, he would not accept such offers, but he was inspired by the location, or rather the sight of the hard-scrabble migrant workers, living and laboring in squalid conditions. It started with the notion of using cast-off materials from the building site itself, ultimately taking shape as a pair of legendary winged Phoenixes.

Xu started the project at a time when Chinese artists could get away with more than they can now, but the Phoenix project was temporarily put on hold, because of a ban on construction and trucking during the Olympics and formally halted after the financial crisis hit. However, Barry Lam came forward with completion funding.

Traub focuses more on Xu’s artistic process than his concern for migrant rights and income inequality, which is fair enough, especially since the resulting film has screened widely at museums (often with Xu’s experimental film, Dragonfly Eyes). However, viewers can still pick up on the issues of worker exploitation and artistic censorship, hovering around the margins. Xu’s experiences also suggest the Chinese economy might not be juggernaut the state media presents it to be.

Fittingly, the Phoenix installation is quite the star of the film. Traub and his co-cinematographers Rick Widmer and Tian Li make the skeletal avian figures look powerful and dramatic. Xu also offers up considerable insights into his art and his perspective on Chinese society.  It is short (17 minutes), but cool looking, with some grist for amateur China-watchers. Recommended for patrons of Xu’s work and independent Chinese documentaries, Xu Bing: Phoenix starts streaming this Friday (8/21) on OVID.tv.
Posted by J.B. at 6:00 AM