Sputnik: The Soviets Brought Back a Passenger 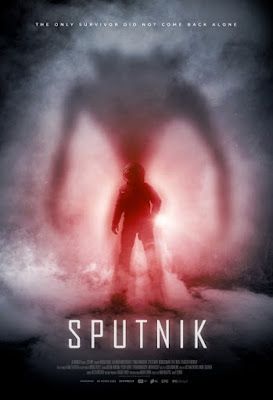 There were good reasons why the Soviets placed their cosmodrome on the Baikonur steppe in Kazakhstan. The flat plains allowed for unobstructed radio signals and the dry climate was good for launch windows. The remote location was also far from observing eyes. The last point will be particularly key when cosmonaut Konstantin Veshnyakov is brought to a secret facility Kazakhstan to supposedly rehab after his “heroic” mission. However, Veshnyakov brought back a surprise “passenger” in Egor Abramenko’s Sputnik, which releases on VOD and in very select theaters this Friday.

Veshnyakov and his co-pilot are anticipating their heroes’ welcome when they hear something on the outer hull of their capsule. Next thing we see, a Kazakh herder finds Veshnyakov and an unsightly mess at the capsule’s crash site.

Supposedly, it will be Dr. Tatyana Klimova’s job to determine what happened to the cosmonaut, in physical and psychological terms. Like House M.D., she is better at tricky diagnoses than consent paperwork. As a result, she was awkwardly available for Semiradov’s proposition. He is in charge of the remote lab, so he is probably something like GRU, as well as military. Regardless, he is most definitely not telling Dr. Klimova the full story. He knows there is something symbiotic inside Veshnyakov that is decidedly deadly—and consequently, potentially valuable.

Set in 1983, the absolute nadir of Soviet Socialist hopelessness, Sputnik has an appropriately grungy look and oppressive vibe. You can certainly understand why cosmonauts would want to spend months in a tin can. The different setting and context help set Sputnik apart from the classic Alien, a tough but inevitable comparison just about every horror-from-outer-space movie has to contend with. In fact, Sputnik is probably the most successful film in the sub-genre to create its own identity since Tobe Hooper’s Life Force. 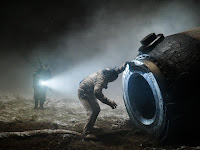 As Dr. Klimova, Oksana Akinshina is convincingly smart, driven, and ill-mannered, in a suitably Gregory House kind of way. Pyotr Fyodorov also looks appropriately haggard and bewildered as Veshnyakov, but Russian tent-pole movie star and director Fedor Bondarchuk probably puts the strongest, most distinctive stamp on the film, as the crisply Machiavellian Semiradov. It is particularly impressive how much energy and “heaviness” he brings to the early expository scenes.

Even though Veshnyakov’s parasite retreats to a different bodily refuge, you could almost think of the film as a sinister Russian cousin to Bad Milo! The creature itself somewhat resembles the thing that takes shape in The Finger episode of Creepshow, but it is still definitely creepy. Abramenko maintains a good deal of tension, while exhibiting zero nostalgia for the Soviet era (which comes across nearly as inhuman as the monster itself). Recommended for horror fans, Sputnik releases Friday (8/14) on VOD platforms and at a few strictly social distancing theaters.
Posted by J.B. at 3:00 AM