Ayumu Watanabe’s Children of the Sea 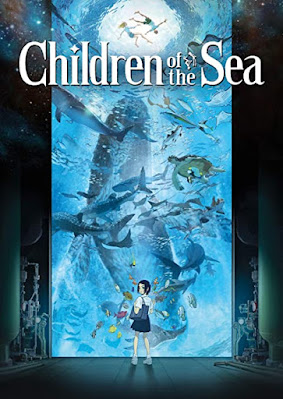 Contrary to what you might have heard in animal rights propaganda docs, Japan has a special kinship with whales. In fact, a gigantic humpback whale appears in Tokyo Bay to offer some kind of mystical warning or portent. Something big (but vague) is going down and only three young teenagers have any clue as to what it might be in Ayumu Watanabe’s Children of the Sea, which releases today on DVD.

Ruka Azumi’s semi-estranged parents met at the aquarium where he still works, so she grew up around marine life. However, Umi and Sora are even more comfortable in the water, because they were literally raised by dugongs (instead of wolves). The aquarium’s brilliant but mysterious research biologist Anglade is studying the boys, in hopes of facilitating their integration into land-based human society and extending their apparently accelerated lives. However, he is also working with the government to prepare for the big impending cosmic whatever.

Feeling alienated from her cliquey peers, Azumi meets Umi and Sora exactly when she needs some new friends. Frankly, she has better rapport with the cheerful Umi than the angsty Sora, but they will still work together as a trio to investigate the mystery of the big thing looming.

Honestly, it is not exactly clear what the big Shyamalanian event is, even after it happens. Let’s just say, Children of the Sea suffers from an acute case of anime-ending-itis, with all kinds of roiling maelstroms of waves that are nearly impossible to follow on-screen. Hanasaki Kino’s screenplay adaptation of Daisuke Igarashi’s manga is much more interesting when it keeps thing micro, exploring the world of the aquarium. It is sort of like the Natural History Museum in Night at the Museum or Relic.

Aside from the whirling-swirling-blurs-together finale, Watanabe’s animation is quite arresting to behold. Real anime fans will probably be even more delighted to hear this is Joe Hisaishi’s first non-Ghibli anime score in years—and it has a wonderfully crisp and sophisticated vibe. The characters are pretty conventional anime figures, but it looks and sounds fantastic.

If you have been waiting for a film with dugongs than rejoice, because it is finally here. They are actually pretty cute and cinematic too. Unfortunately, the narrative is only so-so, because it is saddled with way too much mystical hokum that is never adequately explained. Recommended for the animation and the score, Children of the Sea releases today (9/1) on DVD.
Posted by J.B. at 3:00 AM