Back to School: The Loyalist (short) 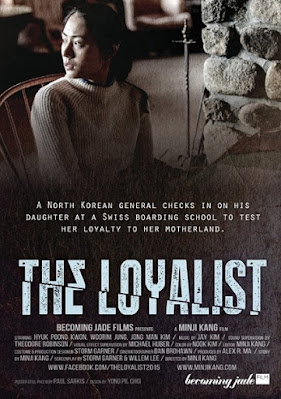 As more countries belatedly adopt Magnitsky-style sanctions, the question will start to arise regarding how the families of serial human rights abusers should be treated. They might technically be innocent of their parents’ crimes, but they still stood to benefit from their corruption. In most cases, they knew well enough. However, it is not clear just how well a North Korean music student studying in Switzerland understands her father and the regime he serves. He has come to test her loyalty and perhaps vice versa in Minji Kang’s short film, The Loyalist, which is available on Omeleto, as a potential supplement to that curriculum on North Korea you’re whipping up for your kids (like the NY Board of Ed would do it for you).

For years, Gen. Roh’s daughter Shilla has studied at a Swiss boarding school, where her angelic voice has garnered praise and encouragement. Frankly, it might be too angelic, since she has often been featured as a soloist in chorale performances of “Ave Maria.” Being nestled away in Freiburg has protected her from the insanity of her homeland, but it has also raised suspicions. The doctrinaire officer has come to verify she hasn’t shaken off her brainwashing and started to question the Kim dynastic regime and its Communist ideology. Rather awkwardly, she plans to ask permission to follow her musical dreams, no matter where that might take her. Obviously, something or someone will have to give here.

You might want to watch Loyalist before you program it for your teens and pre-teens, because there is a brief but shocking incident of violence. If you are not trying to shelter them from such imagery (rather excessively in our view), the film raises a host of important themes for discussion, first and foremost being the nature of totalitarian regimes. It helps personalize the dehumanizing demands made by collective ideologies for individual sacrifice, through the eyes of a teenaged character most kids should identify with.

If you just happen to be a film lover who doesn’t have to double as work-from-home teacher, The Loyalist can also be recommended merely as a remarkably well executed film. Kang deftly uses music for dramatic effect and skillfully builds tension through the claustrophobic mountain cabin setting. It is also hard to overstate the importance of Hyuk Poong Kwon, who is excellent playing the titular general. It is a quiet performance, but it is truly terrifying, because he so vividly expresses the corrosive influence of DPRK paranoia and propaganda.

There is a lot more kids should learn about the mass incarcerations, executions, and widespread starvation that makes North Korea one of the most repressive and miserable nations on earth, in order to make them informed citizens. Yet, as a micro snapshot, The Loyalist is illuminating. Plus, it is gripping stuff as a film. Enthusiastically suggested for curricula or your personal viewing appreciation, The Loyalist is available on Omeleto (via YouTube).
Posted by J.B. at 6:00 AM