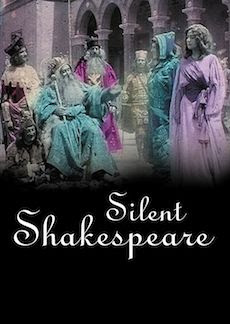 There was a time when playing the piano and reading Shakespeare were a typical evening’s entertainment for average families. A special night out might involve watching a traveling Shakespeare performer. It really wouldn’t have mattered if the earliest Shakespearean films were silent, because most of the audience would be familiar with the stories and a good deal of them would know the dialogue. These days, a lot of viewers don’t just need a soundtrack—they could also use Cliff Notes. At least most film lovers can appreciate the spectacle and inventiveness of the early Shakespeare films the BFI has assembled into an hour-long That’s Entertainment-style program, Silent Shakespeare (a.k.a. Play On!: Shakespeare in Silent Film), which premieres today on OVID.tv.

It seems weird the very first Shakespeare film was King John from 1899. Yet, even though it is not a contemporary favorite, it was one of the Bard’s biggest hits in his lifetime. “Gilding the Lily” sort of comes from it, via a lumped together paraphrase. Originally, it ran four minutes and consisted of four scenes, which was certainly economical filmmaking, but only the King’s death scene survives. Of course, it is grainy, but also rather spooky looking.

In addition, curator Bryony Davis scoured the BFI vaults for probably a dozen or so distinctive-looking Shakespeare silent films that editor Becci Jones stitched together for dramatic effect. Several are still quite striking looking. In fact, the Othello from 1922 looks stylistically and aesthetically similar to Orson Welles’ 1951 Othello. The visual trickery 1908’s The Tempest and 1909’s A Midsummer Night’s Dream are still amusingly mischievous. There is even the star-power of Sir John Gielgud appearing as the young Montague in the surreal one-minute Living Paintings (Romeo and Juliet).

Yet, the most intriguing clips hands-down come from Svend Gade & Heinz Schall’s Hamlet of 1920 (a.k.a. Hamlet: The Drama of Vengeance). Following in the tradition of Sarah Bernhardt, this Hamlet is played by Danish thesp Asta Nielsen as a woman secretly passing for a man, which really was a very Shakespearean twist.

The silent Shakespearean images are accompanied by original music composed and performed by artists associated with Shakespeare’s Globe. It all sounds very appropriate for strolling minstrels. It sort of works in this context, since most viewers will want to hear music that is Bard-like. However, the best way to open up silent films for contemporary audiences and make them breathe again is through original soundtracks. When the exaggerated facial expressions and wailing gestures are coupled with music that connects with us on a deep emotional level, the on-screen drama suddenly becomes something primal and archetypal. Tinkling old timey piano just doesn’t cut it.

Regardless, the Silent Shakespeare program is a brisk and consistently interesting variety pack of vintage Shakespeare films, many of which are now too old to be conventionally projected. It will definitely leave most viewers eager to see more—and happily Nielsen’s Hamlet is available online. Recommended for curious cineastes, the Silent Shakespeare compilation starts streaming today (9/22) on OVID.tv.
Posted by J.B. at 6:00 AM