Back to School: Sweden—Lessons for America 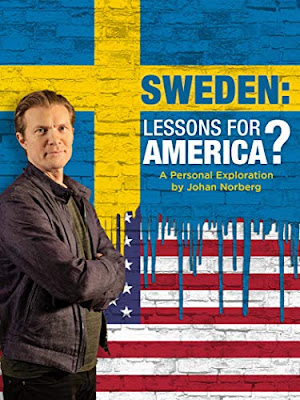 Which is more famous, Ingmar Bergman or Ikea? Whichever the case, they are both Swedish and their history undermines the faulty image many Americans have of Sweden as a socialist paradise. It isn’t socialist. It has a free and open capitalist economy that it balances with a welfare state. If you really want to make America more like Sweden, we can start by abolishing the minimum wage, because Sweden has none, nada, zippo. Swedish economist John Norberg gives Americans a cogent survey of Swedish economic history in Sweden: Lessons for America?, directed by James & Maureen Castle Tusty (who helmed the wonderful Singing Revolution), which is available on Prime and YouTube for your lesson planning consideration.

How could U.S. politicians who garnered disturbingly high vote totals have such an inaccurate impression of Sweden (and Scandinavia in general)? Basically, their information is at least twenty-five years out of date. Norberg gives more exact dates and figures, but essentially Sweden grew at an explosive rate from 1850 to 1960, due to free trade and low regulation, but its economy stagnated from 1960 to 1995, while it experimented with overt socialism. However, aggressive emergency deregulation measures were passed in the mid-1990s that led to a robust economic rebound.

At this point, somebody out there probably wants to make an objection based on Sweden’s renowned “socialized medicine.” Yes, the government pays for universal healthcare, but it mostly provided by the private sector, while a growing segment of the Swedish population is opting for private insurance instead, to avoid long waiting lists. Indeed, most of Sweden’s social service are provided by the private sector, including education. Unlike America, where your school is determined by your zip code, Sweden has a full voucher system. As a result, fifty percent of Swedish high schools are now private.

Of course, somebody has to pay for generous social welfare programs. The socialist government of the 1970s did its best to hide the costs, but in some cases, they truly proved the Laffer Curve in spades. Beloved Pippi Longstocking author Astrid Lindgren turned against the socialist government when her marginal tax rate for a new book rose to 102%. Likewise, Bergman became a tax fugitive when his marginal rate for a new film hit 129%. The government’s hostility to private enterprise also spurred Ingvar Kamprad to move Ikea’s headquarters to the Netherlands. Somebody still has to pay for the welfare state, so Sweden currently relies on one of the most regressive Value-Added taxes in Europe (much like a national sales tax).

In his hosting segments, Norberg clearly enjoys poking fun at Swedish stereotypes. Sometimes he even gets a little shticky, but his economic analysis is spot on. This film is truly stuffed with illuminating revelations. Frankly, if you incorporate Sweden: Lessons for America into your lesson plans, your kids will be better educated than most adults. There is so much here people should know (and what they think they know is usually wrong). Highly recommended for students and anyone who intends to vote in the future, Sweden: Lesson for America is available on Prime and other streaming services. For lessons on microeconomics and entrepreneurship, Norberg & the Tusty’s Economic Freedom in Action is also enthusiastically recommended.
Posted by J.B. at 6:00 AM