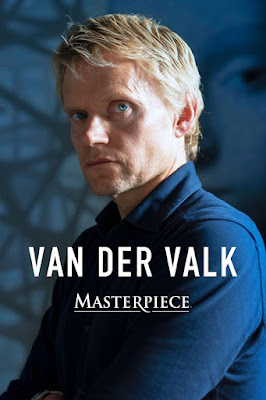 It can’t be that hard to catch petty street criminals in Amsterdam, since they usually try to escape pedaling away on bikes. It is the murderers hiding in plain sight who are trickier. Police Commissaris Piet van der Valk tangles with three sneaky killers entwined in the worlds of politics, religion, and fashion. His blunt personality is not inclined to be diplomatic, but he has a knack for getting at the truth in the freshly rebooted Van der Valk (still based on Nicholas Freeling’s mystery novels), which premieres this Sunday on PBS.

This time around, there is no Barry Foster or the iconic “Eye Level” opening theme. However, English is conveniently spoken throughout all quarters of Amsterdam, because they apparently collectively realized Dutch is a silly language. Van der Valk is already brooding hard, but he is trying to start dating again, thanks to the prodding of the loyal Inspector Lucienne Hassell. They would be perfect for each other, if their orientations were compatible.

At one point in “Love in Amsterdam,” van der Valk describes his political stance as the belief all politicians should be shot. Events of the first feature-length episode will largely bear him out. Two mysterious thugs, presumed to be connected to the ruling Trumpish party set out to abduct a leftwing minority activist, but they are forced to scoop up two witnesses in the process, whose bodies quickly turn up at dumping sites.

Initially, the “Love” mystery feels like a not-so thinly veiled attack on Geert Wilders and his supporters. However, the vanished activist’s supposedly principled candidate does not exactly conduct himself in a manner van der Valk would describe as forthcoming. Indeed, quite the contrary. Arguably, it is hard to say which extreme looks worse when the Crime Brigade finishes turning over rocks. Whether it was deliberate or not, series writer Chris Murray neatly turns viewers’ expectations in on them. Stephanie Leonidas is also terrific as Eva Meisner, the witness van der Valk rather unprofessionally starts to get involved with.

Similarly surprises pleasantly lie in store for viewers during “Only in Amsterdam,” in which a sexually repressed nun becomes a person-of-interest in the murder of her lesbian lover. The investigation takes van der Valk and his team through a New Agey humanist drug clinic and exposes the intolerance of the victim’s strict Muslim father. Along the way, a fair number of potential suspects call attention to themselves, so the conclusion is not immediately obvious, rather refreshingly. In this case, guest stars Juliet Aubrey and Taj Atwal do a lot to keep viewers off balance as Sister Joan and the victim’s sister.

Van der Valk’s third case, “Death in Amsterdam,” comes at an awkward time for the detective, right when he and his superior officer, Chief Commissaris Julia Dahlman are working under-the radar to keep a corrupt senior copper behind bars. He is also a it out of his depth when it comes to haute couture. However, his naïve junior team member Job Cloovers, a favorite of Dahlman’s, is deeply steeped in fashion news and gossip. Basically, everyone in the industry is petulant and self-centered, so there are a fair number of potential suspects. They also make millennial vloggers and fashionistas look like shallow, slimy jerks.

As van der Valk, Marc Warren’s piercing eyes are really close to the wrong side of creepy. However, he has a talent for delivering caustic dead-pan one-liners. In fact, his ironic attempt at a motivational speech in “Love” constitutes some classic TV. He has some decent buddy chemistry with Maimie McCoy’s Hassell, (but her character is not nearly as fully developed). If nothing else, Warren certainly looks Dutch.

Elliot Barnes-Worrell provides a sympathetic viewer rooting interest as the eager to please Cloovers, because his portrayal emphasizes intelligence as much or even more than the rookie’s nebbishness. Luke Allen-Gale is basically (very mild) comic relief as the schlubby squad-member, Brad de Vries, but Emma Fielding’s work as Dahlberg has its appropriately commanding and sensitive moments. Plus, she is the caretaker of Trojan, the retired search dog, who is the series’ real scene-stealer. Darrell D’Silva adds further eccentricity as the hard-drinking medical examiner, Hendrik Davie, who also looks very Dutch.

PBS definitely seems to have a thing this year for English mysteries set in Amsterdam. The drama of Baptiste is more compelling, but it is easier to dip in and out of the new Van Der Valk, even though it addresses some pretty dark themes, as well. Regardless, the level of Murray’s writing remains consistently high throughout the first rebooted season. Frankly, the way the series boomerangs assumptions around on viewers might explain the unfairly harsh reviews from UK critics. The new Van der Valk is in fact quite good (it’s not Dick Maas’s Amsterdamned, but what else is?), especially if you will not be judging it against the Foster series or Freeling’s books. Enthusiastically recommended for British/Euro mystery fans, Van der Valk premieres this Sunday (9/13) on most PBS outlets.
Posted by J.B. at 6:00 AM