Alone (But Not Alone Enough) 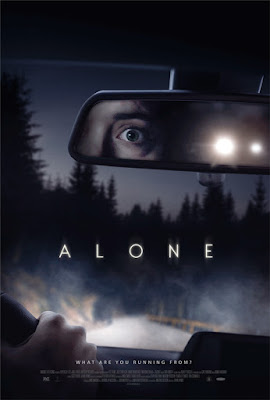 Suddenly, we are witnessing a barrage of single-women-abducted-by-serial-killer-payback movies. Kneejerk critics celebrate them for striking against the “patriarchy,” as if such a thing existed. Instead, they really prove women traveling late at night in sketchy areas really ought to have concealed-carry permits. Psycho-stalkers are definitely not fans of the 2nd Amendment. Unfortunately, Jessica is completely unprepared for her abductor, but she is more resourceful than he (or even she) expects in John Hyams’ Alone, which releases in drive-ins and on VOD this Friday.

Still reeling from her husband’s unexpected suicide, Jessica has decided to relocate away from her painful memories and intrusive mother. It is just her and a U-Haul being tailed by a black SUV. At one point, the man introduces himself, but she still gets Spider-sense bad vibes of him. Her instincts are vindicated when he runs her off the road and knocks her unconscious. However, unlike his previous victims, Jessica manages to escape from his cabin cellar, out into the Pacific Northwest woods. Once again, it is hunter versus prey, with the unnamed man holding most of the advantages, but the odds are still better for Jessica than they were in his dungeon.

For some reason, numerous genre filmmakers have suddenly had the urge to put their own spin on I Spit on Your Grave. Weirdly, Alone is a remake of Mattias Olsson & Henrik JP Akesson’s Swedish thriller Gone, adapted and Americanized by Olsson, so the film really has little claim to originality. Regardless, even though Gone had very little U.S. festival play, the word on the street is Olsson fixed a lot of credibility issues in his original.

In fact, he comes up with some gripping table-turning stuff during the third act, much like Vincent Paronnaud’s eerily similar Hunted (and not all that different from Coralie Fargeat’s Revenge). Hyams’ execution is tight and tense, while cinematographer Federico Verardi makes the natural landscape look vast and unforgiving.

Marc Menchaca (the infected cop in The Outsider) often resembles a cold and clammy Jason Sudeikis, so everyone should automatically be uncomfortable whenever he is on-screen. Frankly, he really comes across as so ordinary and pedestrian, bordering on nebbish, it really is disturbing to see and hear the cruelty he is capable of. Jules Willcox handles Jessica’s evolution from scared victim to fierce angel of vengeance as well as anyone in retro-grindhouse revenge movie ever has. It is also rather notable to see Anthony Heald (Dr. Frederick Chilton in Silence of the Lambs and Red Dragon) effectively playing against type as a well-meaning by-stander.

In movies like this, the payback better pay-off, or the filmmakers are really inviting you to just be entertained by the abduction and torment of a woman. At least in this case, Hyams, Olsson, and Willcox serve up a stone-cold but satisfying climax. Recommended for fans of grindhouse kidnapper-retribution movies, Alone opens this Friday (9/18) at drive-ins (fittingly), like the Vintage in Avon, NY and on VOD platforms.
Posted by J.B. at 8:45 AM