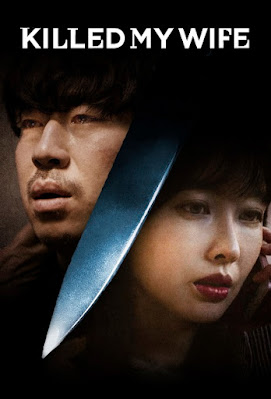 As titles go, this one sounds like a pretty damning confession. For Chae Jung-ho, it is more of a question than a declarative statement. In matters of uxoricide, if you have to ask, you are in a world of trouble. Waking up from a post-blackout stupor, Chae’s discovers his estranged wife has been murdered and he is covered in blood. Naturally, like all protagonists of Wrong Man-style thrillers, he will evade the police to prove his innocence, if his is indeed innocent in Kim Ha-ra’s Killed My Wife, which releases on VOD this Friday.

Chae is a mess. He is an angry drunk, who is prone to blackouts. It is easy to understand why his wife, Jung Mi-young kicked him out, especially after his gambling debts forced him into the arms of an especially predatory loan shark. However, Chae is rather surprised to find his wallet stuffed with cash, but it seems to match the blood on his shirt and the stiletto in his pocket. Bits and pieces of the previous night start coming back to him, as he retraces his steps.

The dogged police detective Choi Dae-yeon is right on his heels and he has a strong motivation to hang the fugitive out to dry. That would be the frying pan Chae took to his head. Choi has plenty of his own issues, but when he follows Chae into the underworld, he turns up plenty of lowlifes he would also like to take down.

Thematically, Killed My Wife shares the economic determinism and dour world view of Kim Ki-duk’s Pieta, but it actually might be grimmer, if that’s even remotely possible. Fortunately, it also has the benefit of grizzled Det. Choi. He’s no Sam Gerard from The Fugitive. Frankly, the slightly corrupt Korean copper is much more interesting. He will look out for himself during the course of the film, but he still has a sense of justice. Ahn Nae-sang is terrific expressing all Choi’s moral nuance and middle-aged frustration. In fact, his portrayal of the character is worthy of a sequel.

On the other hand, Chae’s compulsively self-destructive becomes exhausting and repetitive, while Lee Si-un’s soul-dead, glassy-eyed performance mostly hits the same not over and over again. Likewise, Wang Ji-hye basically walks around with a “victim” sign on her back in flashback appearances as Jung. Still, you have to admire the dastardly glee Seo Ji-young brings to the film as loansharking “General Manager” Kim So-jin.

Yes, times are tough. However, leg-breaking is illegal, both here and in South Korea. Ironically, financial regulators who maintain artificially low interest rates make small dollar and won loans prohibitively risky and unprofitable for legitimate lending institutions, forcing working class borrowers to seek out loan sharks instead. Regardless, Chae’s ruinous impulses are just painful to watch, but crafty (old-ish) Choi is something else entirely. Recommended for its intriguing procedural stuff, Killed My Wife releases on VOD platforms this Friday (9/11).
Posted by J.B. at 3:00 AM