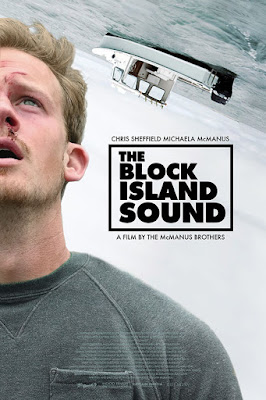 Block Island is part of the state of Rhode Island, so you know it is probably economically depressed, but the recent waves mass fish deaths will make things even worse. That is the only reason Harry Lynch’s sister Audry, a state environmental field investigator has returned home, but when she does, she finds her father and brother acting all kinds of weird in Kevin & Matthew McManus’s The Block Island Sound, which had its world premiere at the 2020 Fantasia International Film Festival.

Old man Tom Lynch has not been himself for a while, but his son has covered for him, mostly due to fears he might be losing just about his only companion. Sadly, during Audry’s visit, crusty Tom sleepwalks onto his boat and keels over the side somewhere in Block Island Sound. The thing is old Lynch maybe wasn’t sleepwalking. Angry Harry suspects something more sinister might have been controlling his father and now it is tormenting him too.

Of course, Harry was always irritable and anti-social, so it takes a while for Audry to realize the severity of her brother’s condition. However, as Harry suffers from increasingly conspicuous headaches, blackouts, and apparent sleepwalking bouts, she becomes alarmed. She assumes it is neurological or conventionally environmental, but Harry and his conspiracy-mongering former classmate suspect paranormal causes. So will viewers, since this film screened at Fantasia.

Block Island has a strong sense of place, with a vibe that suggests a cross-between Sea Fever and a 1990s Ed Burns movie. The Lynches truly bicker like family and drink like sailors. Everything looks grungy, lived-in, and totally believable.

That is most definitely true of Chris Sheffield’s performance as Harry Lynch as well. Just watching him can give viewers a stress headache, especially since his self-destructive behavior can cause serious forehead-slapping. Yet, he always comes across acutely and tragically human. Michaela McManus is also highly compelling as Audry, the most together Lynch family member. Yet, what really makes the film memorable are the freak-outs and creepy standing-eight-counts from Neville Archambault (the sinister voyeur in 14 Cameras), as the afflicted Lynch patriarch.

The “Sound” in Block Island Sound has a double meaning. It is the body of water where bad things happen, but it also refers to the otherworldly noises that torment the victims, designed to burrow inside the ear by Shawn Duffy. It all looks grimly realistic and sounds quite distinctive, in an unsettling kind of way. Recommended for fans of maritime-themed horror, The Block Island Sound premiered during this year’s Fantasia.
Posted by J.B. at 9:15 AM