Wives of the Skies (short) 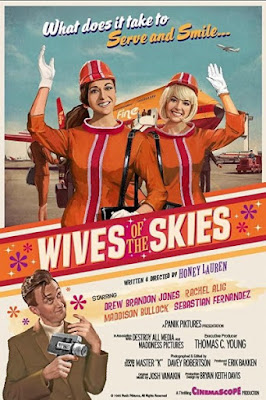 It is a cardinal law of publishing that ghost-writers should never call attention to themselves. Yet, the true author of the 1967 smash bestseller Coffee, Tea or Me? did just that when he took credit for it in his memoir. Yes, it turns out the sexy flight attendants’ tell-all really was an airline guerilla marketing campaign. Exploitation masters like Roger Corman and Al Adamson rode the resulting wave with the air-bound sex comedies. There is still a weird fetishistic interest in 1960s stewardesses (as they were then called) that inspired and gets lampooned in Honey Lauren’s short film, Wives of the Skies, which releases Tuesday on VOD.

Clearly, bottom-feeding British journalist Derrick Wooder has ogled stewardesses in airports and consumed media like “Trudy Baker & Rachel Jones’” Coffee, Tea or Me. Having completed an assignment in America (circa 1965), he hatches a plan to shoot a brief documentary about the women who work as “wives of the skies.” As luck would have it, two women staying in his hotel look like they would be perfect subjects: Fran Baxter and Marcy Carter, who both work for Fine Air. Baxter and Carter have a way of acting simultaneously innocent and saucy that quite stimulates his imagination. However, his mind will be completely blown when he arrives at their room for his first interview session.

Although Lauren obviously set out to subvert the male-gaze-blah-blah-blah, she does so in a way that is refreshingly gentle and endearing. Rather than setting up Wooder as an object of contempt and scorn, she makes us rather like the fellow. Ironically, he turns out to be the most naïve character of the film. In fact, she gives us unlikely but genuine feel-good resolution to her naughty tale.

Wives is a triumph of period production, starting with Stephanie Scull’s spot-on retro uniform design. Craig Owens’ groovy, loungey tunes also perfectly evoke the Swinging Sixties vibe. Everything about the look of the short, from the era-appropriate décor to the splashy graphic design reflects the tacky fun of the milieu. Despite their characters’ extremes, Rachel Alig, Maddison Bullock, and Drew Brandon Jones are all so likably upbeat and earnest as Baxter, Carter, and Wooder, respectively, they could probably reprise these roles in an ongoing sitcom, but it would have be on a streamer that isn’t intimidated by mature subject matter.

Wives looks and sounds terrific. Lauren offers up some naughty nostalgia in an impressively designed 21-minute package that never overstays its layover-welcome. Recommended for fans of the camp it satirizes, Wives of the Skies releases Tuesday (9/29) on VOD platforms.
Posted by J.B. at 6:00 AM