The Devil All the Time, on Netflix 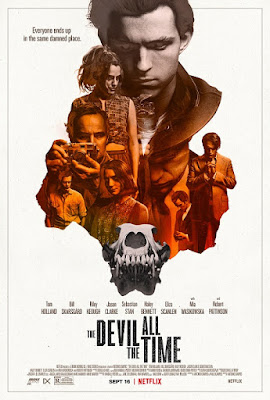 You can still find Southern Gothic in Southern Ohio. Remember, it borders Kentucky and West Virginia. Indeed, the proximity of Knockemstiff, OH to Coal Creek, WV is clearly established in the early minutes of this decade-spanning thriller. Culture follows geography, but human nature is rotten wherever you find it in Antonio Campos’s adaptation of Donald Ray Pollock’s novel, The Devil All the Time, which premieres today on Netflix.

Willard Russell returned from his WWII service in the Pacific with his faith profoundly shaken. Yet, when he marries kind-hearted Charlotte, he starts to pray again, until tragedy befalls the family. It will be a lot for their young son Arvin to bear on his shoulders, but he trudges on, doing his best to look out for his grandmother and his “half-sister” Lenora Laferty. In this case, “half-sister” is more of an honorary title. Technically, she is the daughter of a family friend and her faith-healer husband, who has lived with the Russells since her parents came to a bad end.

Bringing people to bad ends is the specialty Carl and Sandy Henderson, husband-and-wife serial killers, who specifically target young, male hitchhikers. Sandy also happened to briefly work with Charlotte Russell in the diner, where they both met their future husbands. In the small world of Knockemstiff and Coal Creek, Sandy Henderson also happens to be the sister of Lee Bodecker, the corrupt local sheriff. Whenever someone crosses paths with people like them, bad things surely happen.

If you get past the initial wartime crucifixion and a faith-healing train wreck, the character of Rev. Preston Teagardin, a sexually predatory Elmer Gantry-figure, might lead you to conclude the film is reflexively hostile to Christianity, but that really would not be fair. If you see the film through, it ultimately feels like a dark but profoundly moral thriller, very much in the tradition of Night of the Hunter. One thing is certain—both God and the Devil will try men’s souls dearly as the narrative unfolds.

Unfold it does, with the help of both Pollocks’ words (faithfully adapted by Antonio & Paulo Campos) and his voice, providing the ironic narration. It is actually one of the rare instances when voiceovers really bring something to a picture.

Equally notable, Tom Holland delivers the best work we’ve seen from him as Arvin Russell. It is an understated performance, but his slow-boiling rage is always palpably present. Quite appropriately, we can see the same qualities in Bill Skarsgard’s turn as Willard Russell. Somewhat counter-intuitively, the Job-like Russells are by far the film’s most intriguing characters, whereas Jason Clarke and Riley Keogh make rather standard-issue, workaday serial killers as the Hendersons. However, Robert Pattinson is impressively sinister as Teagardin, without resorting to cartoony shtick.

As a period production, Devil fully immerses viewers in its particular time and local. You can almost feel the humid air and the depressed atmosphere (believe me, the air gets humid and heavy in Ohio). It also sounds spot-on, thanks to a soundtrack steeped in Americana and 1960s pop, including two songs by co-star Pokey LaFarge. There are times in the first and second acts, when the connections feel forced, but Campos (loyal to his source) brings it all together at the end. Eventually, those contrivances blend into a potent cocktail of meaningful parallels and tragic echoes. Recommended for patient and mature viewers, The Devil All the Time starts streaming today (9/16) on Netflix.
Posted by J.B. at 6:00 AM