Jay Sebring … Cutting to the Truth 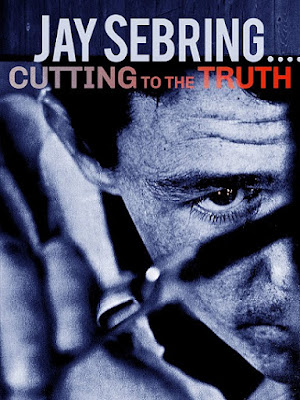 Jay Sebring didn’t just cut men’s hair—he styled it. He should sit next to his friend and admirer Vidal Sassoon in the public consciousness, but instead, he is best known today as one of the people who was murdered with Sharon Tate at the Cielo Drive house. First, he was killed by the Manson cult and then the media assassinated his character. After years of resenting the way pop culture marginalized his uncle, Anthony DiMaria tells his story and sets the record straight in Jay Sebring . . . Cutting to the Truth, which releases tomorrow on VOD.

Whatever preconceptions you might have regarding hairdressers, Sebring was probably something quite different. His imdb credits include Butch Cassidy and the Sundance Kid, Bullitt, and The Great Escape, the latter two starring his close friend Steve McQueen, who gave the eulogy at Sebring’s funeral. When he was murdered, Sebring had made his name with a saloon and product line that were poised to take off like Sassoon’s. Yet, he was probably even more established with Hollywood studios and record labels as an image maker.

The divorced Sebring had also been romantically involved with Sharon Tate before her marriage to Polanski. In fact, they had remained close friends and were evidently on the verge of something more, as DiMaria reveals late in the doc, making Cutting to the Truth a newsworthy event.

DiMaria re-establishes his uncle’s identity apart from the Cielo Drive atrocity, chronicling his rebellious youth and Navy service, as well as his rise to prominence in Hollywood. Yes, maybe Sebring enjoyed the party scene, but he still worked hard. He was truly a trailblazer, establishing himself as a name-brand men’s stylist. That is why the specious trash supposedly reputably media outlets like Time and Life Magazine spewed over Sebring after his murder were so painful to DiMaria and his family. Telling, nobody put their names to the hit pieces describing Sebring as a violent, racist pervert—and nobody at Time Warner responded to DiMaria’s inquiries. Everyone who knew Sebring calls such descriptions ridiculous (including Quincy Jones, on-camera), but the mud lingered on his name.

Beyond the sadistic Manson family, two cowardly villains emerge in Cutting to the Truth. One is Vincent Bugliosi, the former Manson prosecutor, who recycled the lurid rumors regarding Sebring in his bestseller, Helter Skelter. Today, Bugliosi loves lecture public figures on ethics, but he declined DiMaria’s interview requests, clearly lacking the courage and character to defend his characterization of Sebring. The other is Polanski, who also declined DiMaria’s interview requests, but is heard happily trashing Sebring under police questioning. Shame on them both.

If you ever had any confidence in the news media, DiMaria should finally shake it once and for all. Yet, he does not merely expose a grotesque example of media malpractice. He also reclaims his uncle’s legacy as an artist and a pioneer, through the words and memories of his intimate friends and family. Plus, Quentin Tarantino provides some cultural context and contemporary star power.

Frankly, there are moments that are just shocking and infuriating. In many ways, DiMaria’s documentary compares with William Genovese’s attempts to expose the real truth of the circumstances surrounding the death of his sister Kitty in The Witness. In both documentaries, established media outlets look like gutter tabloids that disregarded the truth for the sake of a sensationalistic narrative. Very highly recommended, Jay Sebring . . . Cutting to the Truth releases tomorrow (9/22) on VOD.
Posted by J.B. at 6:00 AM