Tar: It Came from La Brea 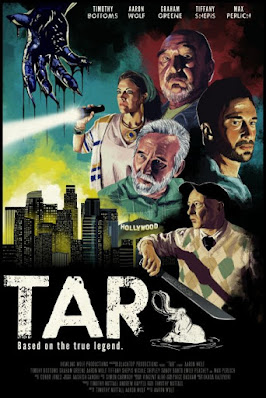 The La Brea tar pits are like ultimate primordial burial ground and the city of Los Angeles was basically developed right over them (and you know what happens to people who build over ancient remains in horror films). From time to time, the pits have appeared in movies, typically of the disaster variety. In this one, the evicted tenants of a down-market office building will not be lucky enough to have a conventional natural disaster to contend with. Instead, they must fight off something monstrous that has survived below in Aaron Wolf’s Tar, which opens this Friday in drive-ins and a few of those places where they project movies.

Things were strained between Zach Greenwood and his father Barry, even before their scummy landlord Sebastien Stirling terminated their decades-old lease with one day’s notice, forcing them to vacate, clean, and repaint by 6:00 am, or face $100K in penalties. Suddenly, they are scrambling to save the family repair business, as is the neighbor, accountant Diana Dunder of DD Accounting (if you don’t get the joke now, you’ll know it when you see it).

Of course, Greenwood’s slacker pal Ben is too busy not helping Dunder to do anything for him and his dad. At least their palm-reading assistant Marigold is an efficient packer. However, when the power is suddenly cut, it really sets them back—and then the mysterious “Tar Man” creature attacks. 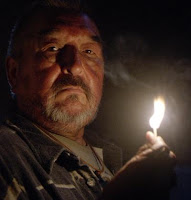 In contrast, Sandy Danto’s Ben is so annoying, we want the group to shove him towards the tar man, but that’s the role he is supposed to play. Frankly, Wolf himself is probably the blandest, most vanilla of the lot, playing Greenwood fils. However, Graham Greene outshines everyone as the ragged but still seriously cool Carl.

Tar is a lot of fun. It could have been a classic, if it could have maintained the humor and energy better down the stretch, but it is still a far-better-than-average monster movie lark. Before Tar, William Castle’s 13 Ghosts one was of the most “memorable” horror movies to use La Brea as a location, so it would be amusing to watch the two flicks as double feature. Recommended with enthusiasm for genre fans, Tar releases the Friday (10/2) at drive-ins and on VOD platforms on 10/20.
Posted by J.B. at 6:00 AM