OVID.tv: Akerman’s From the East 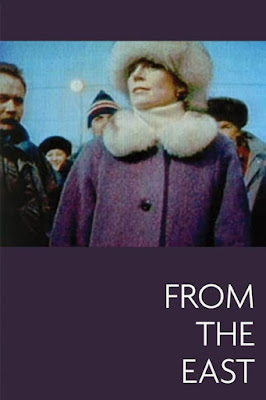 It was Chantal Akerman’s “End of Communism” Rock & Roll-All-You-Can-Drink-Late-Night-Road-Trip-Party. Actually, it is an experimental non-narrative 16mm docu-essay, but the precipitating event is the same. Inspired to document the Communist East while it still existed (or at least before the old way of life changed for average citizens), Akerman essentially filmed whatever caught her eye during her journey through East Germany, Poland, and Russia. There are no talking heads to provide context. Instead, Akerman takes us to the cold, damp streets behind the former Iron Curtain in From the East (D’Est), which premieres tomorrow on OVID.tv.

Although D’Est was originally conceived as a stand-alone film, Akerman later incorporated it into a special installation. Frankly, that might be the best forum for it. It is rather hypnotic to watch her restless camera scan the weary faces of the innumerable by-standers queueing around street corners and packed into train stations, staring out blankly at the audience. It would probably be even more so as part of an immersive destination exhibit. However, casual viewers should be forgiven if they lose patience with it at home.

Regardless, D’Est is very much a time capsule that transports us to a very specific place, at a very specific time. Of course, much has changed in Germany and Poland since Akerman shot her footage in 1992. Russia—maybe not so much. The babushkas are different (presumably), but the crumbling edifices are the same (if not worse).

Frankly, if you took a similar journey east today, you would suddenly find yourself in the West when you hit the Baltic Republics, where they uphold democratic values and observe their NATO commitments. Poland has made great strides, but recently they have taken a bit of a detour through populism—it happens to the best of countries. However, Russia is practically back to where it started, passively standing in line, waiting for change, but acquiescing to the status quo, out of fear things could get worse. 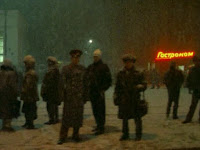 D'Est is a non-narrative film, but it has a strong sense of linearity. Akerman’s camera relentlessly pans the tired proletarians, constantly rushing towards screen-left (appropriately). It is almost like her method is itself a metaphor for time literally passing by these hunched over figures. The tour-bus perspective is admittedly dehumanizing, but the damage was already done by the old system.

Akerman originally traveled to the soon-to-be-dissolved USSR to research a potential film about Anna Akhmatova. It is a shame that project was never realized, because Akhmatova deserves to be much more widely read these days. A film by Akerman, who is frequently the focus of repertory programming, could have helped keep the poet in the public consciousness. Be that as it may, D’Est certainly captures a keen sense of the end of an era. If nothing else, it prompts some interesting reflections, which means it still holds value. Recommended for those who understand Akerman and her oeuvre, From the East starts streaming tomorrow (9//25) on OVID.tv.
Posted by J.B. at 9:45 AM