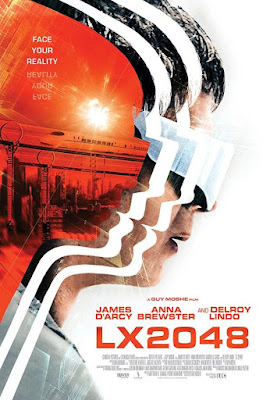 It is a work-from-home future, for those who still work. Productivity has nose-dived, because most people are heavily medicated (on Lithium x) and largely live in a virtual entertainment network called “the Realm.” Adam Bird is literally last person who still physically commutes to his brick-and-mortar office. That adds unexpectedly eerie echoes to director-screenwriter-editor Guy Moshe’s LX 2048, which releases on-demand tomorrow.

Bird does things the hard way, much to the constant frustration of his estranged wife Reena. He is one of the few people who still does business during daylight hours, despite the heavy hazmat suits required by the sun’s heightened radiation. He is dying and so is his soon to be obsolete gaming company. As a result, he is quite concerned for his family’s future.

Thanks to their insurance, Bird will be replaced by a clone once his heart finally gives out. However, he is increasingly concerned his replacement will find himself unemployed. Of course, he is not too thrilled about by the prospect of a clone taking his place. Increasingly desperate, Bird tracks down Donald Stein a brilliant but disgraced inventor. He might be able to help, but not in the way Bird originally anticipated.

Moshe’s screenplay swings wildly back and forth from fascinating and inspired examinations of the nature of humanity to some rather awkwardly over-melodramatic family angst. It is like the best parts of The Matrix mixed with the worst parts of Kramer vs. Kramer. However, when Delroy Lindo enters the picture as Stein, all bets are off. He gives the film a blast of hip, snarky energy, while also expressing many of the film’s philosophical insights.

Presumably, Moshe conceived of LX 2048 long before Covid-19 was a glimmer in some Wuhan bat’s eye (or whatever), but it is impossible not to see parallels when Bird drives through empty freeways to reach his lonely office. Such scenes are eerily executed and they gain in resonance, since they are suddenly so much more believable. However, some of the drama involving Bird and his wife feels over-blown. Frankly, it seems hard to believe the scrupulously off-line Bird could get so caught up in a relationship with an online avatar.

James D’Arcy covers a wide emotional gamut as the disturbed and unstable Bird. There are times when his overwrought tantrums spin away over-the-top, but he is admirably committed and going for broke. In many ways, it is a performance that would be better suited for the legit stage, which sort of follows, because there is an inherent talky staginess to Moshe’s screenplay. Similarly, Anna Brewster is almost impossibly wince-inducing as the harshly bitter Reena Bird.

LX 2048 is much more intelligent than Moshe’s last feature, the visually inventive but shallow and problematic Bunraku. This excursion into dystopian cyber-punk is uneven, but its vibe and speculative insights deserve comparison to Almereyda’s Marjorie Prime (which is admittedly superior). Recommended on balance for the smart parts, LX 2048 releases tomorrow (9/25) on VOD platforms.
Posted by J.B. at 6:00 AM