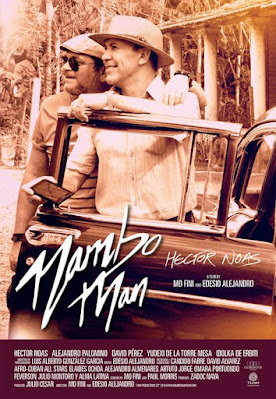 Most films you should want to watch closely, because that is the whole point of the medium. However, sometimes there are films you can enjoy listening to, but you might prefer to give only cursory attention to the events on the screen. This is definitely a “listening movie,” thanks to the wonderful Afro-Cuban soundtrack. The story that goes with it is pretty thin, but you can’t have everything, especially in Cuba. An impresario-farmer-get-rich-quick-schemer probably should just stick to music in Mo Fini & Edesio Alejandro’s Mambo Man, which releases virtually today.

JC (not a very Communist name, is it?) is the beloved godfather of the East Cuban music scene, even though we never see him pick up an instrument. Regardless, he is just wrapping up an album with music producer Mo Fini, playing himself. Thanks to unseasonable weather, he is sweating out his crops, but he still finds time to host shows for European music tourists on his farm. Then one fateful day, his childhood friend Roberto returns from Ecuador, offering JC a golden opportunity. The matriarch of a family he knows needs to sell a fabulous collection of jewelry to pay for her transit to Miami, the promised land—at the low, low price of $50K.

Sadly, because Cuba is a closed, oppressive pariah state, JC has never seen George C. Scott in The Flim-Flam Man or any other scam artist movie that would have warned him any deal too good to be true is precisely that. We can see it coming from way down the Malecon, but screenwriters Fini and Paul Morris stretch out their simplistic cautionary morality tale until the seams practically snap. 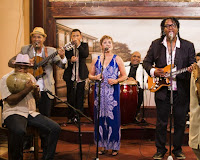 Right, the story is no great shakes, the performances are a little rough at times, and its sanitized presentation of oppressed and depressed Cuban society is highly problematic (there are a few references to shortages and economic instability, but they do not amount to much), yet everything is forgiven, because the music is so good. The rich and rhythmic soundtrack includes several notable Buena Vista alumni, including Juan De Marcos Gonzalez & the Afro-Cuban All-Stars, Eliades Ochoa, and Omara Portuondo. There are also multiple contributions from Arturo Jorge, Julio Montoro Y Alma Latina, and Candido Fabre. Sometimes the music is peppy and upbeat, other times it is elegant in an Old World kind of way, but it always sounds terrific.

So, it turns out you can film a threadbare script with a game but mostly middling cast and still earn a recommendation here. Admittedly, veteran Cuban thesp Hector Noas is charismatic as JC, but his tunnel-vision and bull-headedness still approaches the level of caricature. It might be easier to just buy the soundtrack, but Alejandro & Fini often include some lovely travelogue shots of Havana and the countryside (which cinematographer Luiz Alberto Gonzalez Garcia makes sparkle—rather deceptively). Recommended with reservations for the music—and only for the music—Mambo Man opens today (9/18) in virtual markets.
Posted by J.B. at 3:00 AM