One Lane Bridge, on Sundance Now 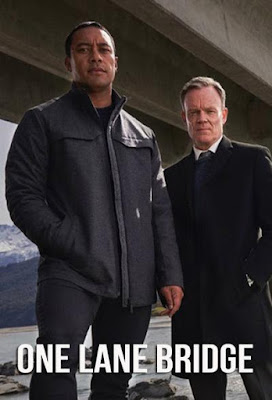 It is sort of like Queenstown’s answer to Nanjing’s Yangtze River Bridge, an infamous spot for suicides, but it is far less urban. It is also a frequent site for accidents and at least one murder. That case will be a trial-by-fire for a go-getting young Maori detective recently transferred from the big city. The case will uncover small town secrets and his own latent second-site abilities in creators Pip Hall & Philip Smith’s One Lane Bridge, which premieres this Thursday on Sundance Now.

Ariki “Ricky” Davis took the transfer to advance his career and to train amid the wide-open natural splendor of Middle Earth, New Zealand. At first, he thinks he will get along just fine with his superior, senior DS Stephen Tremaine, until he starts questioning the local veteran’s handling of their investigation into a prominent farmer’s death. Everyone remembers Grub Ryder as the young teen with enormous potential, but his grown-up years had not been kind. With the 100-year-old Ryder family farm on the brink of bankruptcy, Tremaine is eager to chalk up his death to suicide. However, Davis has good reasons for his doubts.

The Maori detective had not experienced “Matakite” visions since his childhood, but he is suddenly flooded with them after stepping foot on One Lane Bridge, where Ryder presumably plunged to his death. From time to time, he sees Ryder and other apparitions of those who died on the rocks below. For some reason, he is also seeing Tremaine’s wheelchair-bound wife Lois in his waking dreams. As gossip starts to spread, motives surface that force Tremaine to re-open the investigation. Unfortunately, Davis’s increasingly twitchy and erratic behavior might just undermine his career, before he closes his first real case in Queenstown.

OLB looks terrific thanks to the sweeping natural backdrops and stylishly mounted supernatural Matakite sequences. It also boasts a considerable number of highly complex characters. However, the pace is a bit slow at times. Frankly, the six-episode narrative probably could have been boiled down to four installments and been stronger for it.

The lead character also has issues, in every sense. On one hand, Dominic Ona-Ariki’s performance as Davis is magnetically intense. Yet, the cop often behaves like an impolitic blunderer. Honestly, sometimes Hall & Smith make it hard to pull for the guy. Conversely, the moral ambiguity of DS Tremaine effectively builds tension and intrigue. Joel Tobeck plays the copper’s grey areas to the hilt, while relishing his derisive tough boss snark. Alison Bruce also simultaneously inspires suspicion and sympathy as Lois Tremaine in ways that are distinctive but hard to describe.

When watching OLB, you can see the influence of the first season of Broadchurch (the real, British one) had on subsequent crime dramas. Everyone in Queenstown goes through the emotional wringer. Hall & Smith even have a few surprises up their sleeves that a lot of viewers probably will not see coming, which is a good thing. Recommended for fans of Anglo-Commonwealth mystery programming (especially those who will dig the supernatural garnish), One Lane Bridge premieres this Thursday (9/17) on Sundance Now.
Posted by J.B. at 6:00 AM