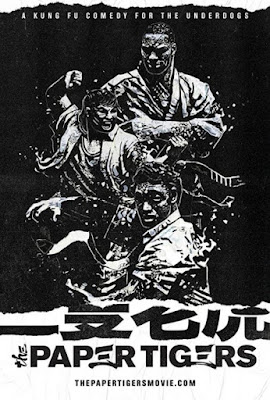 It is the one rock-solid law of kung fu movies: no matter where you are in life, you must avenge your sifu. The trio of boyhood friends who became Master Cheung’s three true disciples really ought to know that, but they have been estranged from each other and kung fu for a number of years. Nevertheless, they will come together and do what honor requires in director-screenwriter Bao Tran’s The Paper Tigers, which premiered at the 2020 Fantasia International Film Festival.

In the gloriously analog 1980’s prologue, Danny (a.k.a. “Eight Hands”) was the toughest teen martial artist on the scene. His sworn brothers Hing and Jim were not too far behind him. Unfortunately, these days, they are slightly less youthful than they once were. For various reasons, each drifted away from Master Cheung and kung fu. Only Jim remained somewhat involved in the martial arts world, becoming a Brazilian jiu-jitsu-MMA trainer. Hing has certainly lost a step due to a workman’s comp accident, but Danny has probably slipped the most mentally. He was once a master at psyching out his opponents, but the divorced, workaholic father no longer has confidence in his kung fu.

Granted, that is a pretty familiar set-up, but some smart buddy chemistry and co-star Ken Quitugua’s action-direction makes it feel fresh. As the three disciples, Alain Uy, Ron Yuan, and Mykel Shannon Jenkins bicker, banter, and bust chops like old friends with long memories. There is definitely humor throughout Paper Tigers, but the action is played scrupulously straight and it compares favorably with any of its mirthless martial arts movie cousins.

Yet, what really makes the film special is Danny’s relationship with his son Ed (nicely developed by Uy and young Joziah Lagonoy). You can tell Tran seriously studied martial arts at one time, from the way he has the father character discussing with his son how and when to fight and when to walk away. After all, those with real training always try their best to avoid fighting in real life, even though they strive to be ready for it at all times.

Action veteran Ron Yuan deserves special credit for his willingness to look so much rustier and more broken-down than his comrades. However, he also delivers a surprisingly poignant speech that perfectly expresses the kind of regret we often feel when someone close to us dies. It is a great performance, so see him in this film, but boycott Mulan, as Hong Kong democracy activists like Nathan Law have advocated, due to pro-Beijing positions of the Disney production’s stars.

Paper Tigers is a fun, up-tempo movie, but it packs a mean punch. You know its old school, because it was produced by Yuji Okumoto (from The Karate Kid II), who also appears briefly in a near-cameo role. Clearly, Bao Tran knows the kung fu genre, because he stays true to the tradition, while finding ways to make it feel contemporary. Highly recommended, The Paper Tigers will soon screen during the Los Angeles Asian Pacific Film Festival, after premiering at this year’s Fantasia.
Posted by J.B. at 9:00 AM