Music + Film Brazil ’20: Where are You, João Gilberto? 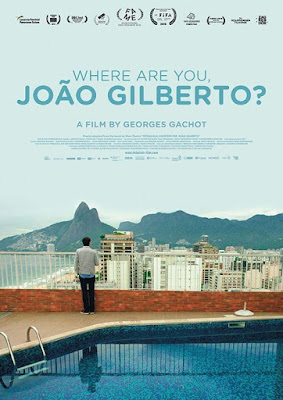 The late João Gilberto was like the J.D. Salinger of Bossa Nova. He was one of the founders of the musical movement and recorded its biggest hit album, the multiple-Grammy-winning Getz/Gilberto, but he had not been seen in public for years. Even his manager and closest family had intermittent contact and only over the phone. Marc Fischer, a German musician, was so fascinated with Gilberto and his music, he wrote a book about his fruitless quest to meet his idol. Georges Gachot, an established documentarian of Brazilian music, retraces Fischer’s steps in Where are You, João Gilberto?, which screens as part of Cinema Tropical’s online 2020 edition of Music + Film: Brazil.

According to legend, Gilberto used to woodshed in his tiny bathroom while he still lived in Minas Gerais, because he thought the acoustics were optimal (both Fischer and Gadot made their pilgrimages there). He recorded some of Bossa Nova’s biggest hits, with Tom Jobim, Stan Getz, and his first wife, Astrud Gilberto. However, as his fame increased, he became increasingly demanding regarding recording and concert conditions, like a Bossa Glenn Gould. Then he disappeared from view. Even his daughter Bebel Gilberto and her mother Miucha (the second wife Gilberto was relatively amicably separated from) only received sporadic calls from the iconic musician.

In a way, that only increased Gilberto’s allure for Fischer. Yet, shortly before the publication of his book, Fischer apparently took his own life. Using Fischer’s book as a road map, Gachot tries to make some sort of connection with Gilberto, for his own fannish satisfaction and as a sort of tribute to Fischer, making the resulting film even more poignant (especially since Gilberto was still alive during its production and initial festival screenings). In fact, Gachot’s journey becomes something like the music writer’s analog to Searching for Sugarman.

Of course, there is plenty of wonderful music to hear along the way, including archival recordings of Gilberto (and maybe, just maybe something more), as well as laidback performances from Miucha, João Donato (Gilberto’s friend and collaborator), Roberto Menschal (friend and colleague), and Marcos Valle (who didn’t really know Gilberto, but was influenced by him and had a memorable conversation with the elusive “O Mito”). 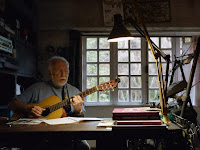 That all makes Gachot’s film an unusually distinctive music doc. Throughout the film, we keep expecting Gilberto to step out of the shadows, like Harry Lime in The Third Man. This isn’t realistic, but Gachot builds a sense of mystery that raises such expectations. He also captures an evocative sense of the beauty and energy of the city of Rio (visiting locales like LeBlon, Ipanema, Niteroi, Tijuca, and the storied Copacabana Palace).

So, this film pretty much has it all. Mystery and intrigue, the sights and sounds of Rio, great music, and a compassionate humanist perspective. Highly recommended for everyone who listens to Bossa Nova (and especially for those who write about it), Where Are You, João Gilberto will be available for a week, starting tomorrow (9/29), on Cinema Tropical’s website.
Posted by J.B. at 8:00 AM