Back to School: America’s Musical Journey 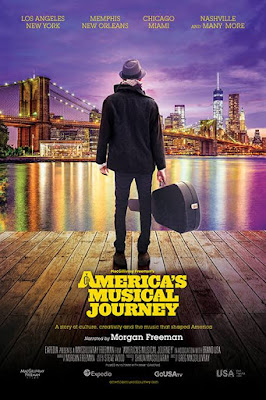 Hey parents, it’s September. Have you finished your Fall lesson plans? After years of sneering at home-schooling, the media now thinks you ought to be doing it. Even with Board-of-Ed materials, you’re going to need supplements to keep your kids focused and learning, so we’ll offer a few video suggestions, from time to time. For a very general lesson in American music history, you can safely turn to MacGillivray Freeman, a leading producer of IMAX films for museum patrons. Currently available on Prime, Greg MacGillivray’s America’s Musical Journey ought to keep kids busy for 39-minutes while you take a meeting.

Your host will be Aloe Blacc, but our narrator is the ultimate voice of authority, Morgan Freeman. Blacc is in fact a good choice to be the film’s tour guide, because even though he is a hip hop-R&B-club-crossover, he is deeply steeped in jazz and Latin styles. He says all the right things about Louis Armstrong, who is clearly the central musical figure in Journey. However, it is a bit annoying he keeps choosing to perform “What a Wonderful World,” which was a posthumous hit for Armstrong, instead of a song that would have had more personal significance for the jazz icon, like “Black and Blue.”

It is fun to see Blacc get a walking tour of New Orleans courtesy of Jonathan Batiste, but it would have been nice to hear more from the pianist (who some viewers might recognize from appearances in Treme, Red Hook Summer, and Da Sweet Blood of Jesus). Dr. John gets even less screen-time, but at least we hear one of his licensed tracks.

Blacc follows the jazz story up to Chicago, meeting up with Ramsey Lewis, but seriously, how could MacGillivray cut away from his performance of “The In-Crowd,” which is still one of the coolest jazz tunes ever? In Chicago, Blacc also checks out a flash-mob dance set to his hit song “Wake Me Up,” one of several IMAX-friendly performance numbers. Later, there will be dancers rappelling across a skyscraper and sky-diving Elvis impersonators to keep kids interested.

Memphis, Miami, and to a lesser extent Nashville, are the other cities to get special musical geo-consideration. Logically, Elvis Presley gets his full due in Memphis. Ironically, this film should remind parents that these days, they will probably have to explain to their kids who Elvis was, rather than vice versa. Gloria and Emilio Estefan have enough time in Miami to at least introduce young viewers to Cuban-influenced Latin music and the dance number for their perennial hit “Conga” is probably the film’s most stylish. However, the coverage of country and gospel is clearly rushed.

Evidently, Keb’ Mo’ played the tour guide role in Memphis, but if you blink, you miss him. We would have preferred more music from him (and Lewis and Batiste) and less sky-diving Elvises, but we’re not the target demo. Regardless, Journey offers some easily digestible music and cultural history lessons, wrapped in some splashy visuals (although the frequent fish-eye effect betrays their IMAX origins). In any event, parent-teachers can let it play and hope the kids get something out of it. Recommended as a supplement for your music curriculum, America’s Musical Journey streams as part of Prime subscriptions.
Posted by J.B. at 6:00 AM