Back to School: The Silent Revolution 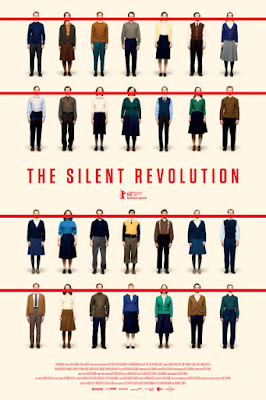 Kids are not any safer living under oppressive regimes and ideologies than their parents are. That is a lesson all students should learn sooner rather than later, for all our sakes. In 1956 East Germany, the Stalinstadt senior class always basically knew the Communist government was vicious and unjust, but dramatic events will prove it beyond all doubt in Lars Kraume’s historically-based The Silent Revolution, which is a perfect supplement for your schooling-at-home lesson plans.

It all started when two high school seniors wanted to see German bombshell Marion Michael in the risqué (for the time) Liane, Jungle Goddess, naturally only screening in the morally decadent West (this is pre-Wall, when travel between East and West was not strictly forbidden). However, before the feature, Theo Lemke and Kurt Wachter are amazed by a newsreel accurately reporting the Soviet crackdown on the 1956 Hungarian Revolution. Lemke is the class clown and Wachter is the son of a local Party official. Neither fits the revolutionary profile (or rather “counter-revolutionary,” according to Party propagandists), but they are both electrified. On returning, they listen to West German radio with their classmates to confirm their reports.

At school, they decide to observe two minutes of silence to honor the fallen Hungarian freedom fighters. Essentially, it was Wachter’s idea, but a majority agreed to it. The only vehement no vote comes from Erik Babinsky, who believes he is the son of a martyred Communist partisan. However, the entire class is in huge trouble when the ministry gets wind of their silent protest. Following Franklin’s advice, the two “ringleaders” try to keep the class hanging together, so they do not hang separately, but the Communists will ruthlessly exploit any and all of the young students’ weaknesses.

Silent Revolution is an absolutely terrific film everyone ought to see, just because its great cinema. It is especially recommended for students, who can surely identify with the teen characters. It can help explain the nature of Communism, particularly with respects to the Hungarian Revolution and the divided Germany. The tragically ill-fated 1953 Uprising also casts a shadow over the events it dramatizes. Yet, Kraume’s adaptation of Dietrich Garstka’s book also addresses worthy themes like personal loyalty, family love and sacrifice, the demands of integrity, and the corrosive impact of lies and propaganda on society.

Kraume’s film is a great history lesson and also a completely engrossing drama. Leonard Scheicher and Tom Gramenz are excellent as Lemke and Wachter. They bring to life very different personas, but their friendship still seems completely natural and believable. Yet, the unforgettable standout is Jonas Dassler, whose wrenching performance as Babinsky will haunt viewers. Fans of Netflix’s Dark will also be impressed by Jordis Triebel (the wife of the cop who travels back in time) taking a cold-bloodedly sinister turn as Kessler, the Ministry’s enforcer.

There are so many reasons young people should watch Silent Revolution and nothing for parents to object to. Of course, there is teen angst going on during the senior class’s prolonged moral crisis, but at one point, Lemke literally tells Wachter they just can’t afford worry about their petty rivalries now. It is great filmmaking on all levels. Very highly recommended for regular viewing or as a supplement to your lesson plans, The Silent Revolution is on the Tubi app and it streams on Kanopy (which many patrons can use with their public library cards).
Posted by J.B. at 3:00 AM