Harbor from the Holocaust, on PBS 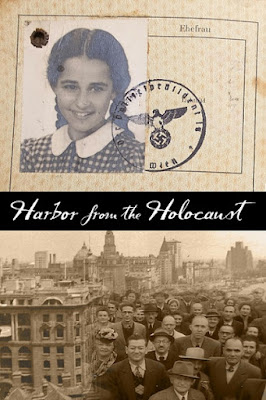 Criticizing the CCP’s handling (cover-up) of the Covid virus or its appalling genocidal policies in East Turkestan and Tibet does not make someone anti-Chinese. In fact, the same concern for human rights that is alarmed by the current wave of arrests in Hong Kong leads us to celebrate the citizens of Shanghai for accepting and befriending Jewish refugees during WWII. 18,000-20,000 German-speaking Jews (primarily from Berlin and Vienna) found hardship, but also relative safety in the cosmopolitan Chinese port city. The “Shanghailanders” tell their stories in Violet Du Feng’s Harbor from the Holocaust, which airs tomorrow on PBS.

It wasn’t exactly an orchestrated national policy. Instead, the sanctuary for Jewish refugees came about through a strange set of circumstances, capitalized on by Ho Feng-shan, the Chinese consul in Vienna. The diplomat recognized his Jewish friends and neighbors were in dire jeopardy, so he issued visas to all comers, knowing there were no functioning authorities in Shanghai to check them. Although the city was under effective Japanese control, they allowed the ports to operate unregulated, so they would not antagonize the foreign concessions.

Of course, that also meant nobody was prepared to welcome the refugees and help them integrate into Shanghai society. However, the prosperous indigenous Jewish community (largely of Iraqi heritage) eventually stepped up, providing basic assistance, housing, and even founding a Jewish school. Unfortunately, the refugees’ living conditions and freedom of movement further plummeted after Pearl Harbor, when the Japanese imposed systematic restrictions on Westerners. Yet, they still refused Germany’s request to apply their “Final Solution” in Shanghai.

In just an hour’s time, Feng (who co-produced Maineland and Our Time Machine) and her interview subjects fully convey the complexity of the Shanghailanders’ situation. It was always difficult and often quite perilous, but they were still better off than they would have been in Europe. Yet, they also found friendship and comradery with average Shanghai residents, who were also suffering under an occupation.

There are many touching tributes in Harbor that are nicely supporting by an elegant soundtrack, featuring Yo-yo Ma and Niv Ashkenazi, playing a documented Holocaust violin. There are also some striking visuals, particularly refugee artist D.L. Bloch’s woodcuts depicting the hardscrabble lives of Shanghai’s native underclass.

Viewers can learn a lot from Harbor. It is an individual choice to do the right thing or the wrong thing. By and large, most average Shanghai residents did the right thing when the Jewish refugees arrived. Conversely, Mainlanders who accept the CCP’s specious justifications for the ethnic cleansing of the Uyghurs and Kazakhs are making an immoral choice. The good citizens of occupied Shanghai give us all an example of how to do better. Highly recommended, Harbor from the Holocaust premieres tomorrow (9/8) on most PBS outlets and the PBS app.
Posted by J.B. at 3:00 AM