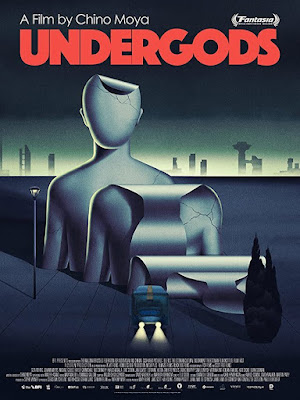 Apparently, it is fun to obsess over post-apocalyptic dystopias, but you wouldn’t want to visit one. Yet, that just might happen to the unfortunates who somehow blunder through a random portal, or maybe not. Maybe, it is all part of the tales of a better past that two wasteland scavengers tell each other to pass the time in Chino Moya’s Undergods, which screens during the 2020 Fantasia International Film Festival.

L and K sound very Kafkaesque, don’t they? Indeed, they are a bit like Vladimir and Estragon, but more predatory. When they come across a body (living or dead), they either sell it as slave labor or meat to be butchered. Essentially, they tell three stories that sort of but don’t quite tie into each other. The first is the least, involving an interloper who worms his way into a not so happy marriage.

The second part is by far the best, by every standard. Presumably, it is being told twice, by either L or K and an incidental bystander to the first tale. There is a darkly baroque quality to this yarn that is not unlike vintage Gilliam. We meet Hans Hals, in this case a former tycoon rather than the Dutch master. This Hals has come down significantly in the world, but when a mysterious “Foreigner” comes to him with the invention of lifetime, the would-be investor decides to steal it for himself. However, like most mad geniuses, the Foreigner is not to be trifled with. He also leads Hals towards a shocking conclusion to his storyline and the film’s only brilliant transition.

The third arc chronicles the drama that results from the sudden return of a husband and father who disappeared without a trace fifteen years ago. Yet, it is really very much like the first full storyline, suggesting how easily people who have lived together for years can abruptly turn against each other. Frankly, much of Undergods plays like the bitter old bachelor trying to justify his misanthropic lifestyle.

Yet, the film’s real problems are the structure and the interstitial segue ways. Undergods presents itself as a Russian doll-style film, but the constituent parts do not properly nest. Khalid Abdalla and Maddison Whelan are both likable and charismatic in the film, but their characters only exist to tell the second tale. By far, the best scenery-chewing genre work comes from Eric Godon and Jan Bijvoet, as the industrialist and the Foreigner.

If nothing else, Undergods delivers a withering indictment of Brutalist architecture. The crumbling dystopian cityscapes are truly awesome to behold. Unfortunately, all the great world-building is done on the visual level. There are things going on that could have been fascinating if Moya more fully explored them, but instead we get too much underwhelming domestic drama. Inconsistent and often frustrating, Undergods screens again today (9/2), during this year’s Fantasia.
Posted by J.B. at 5:00 AM