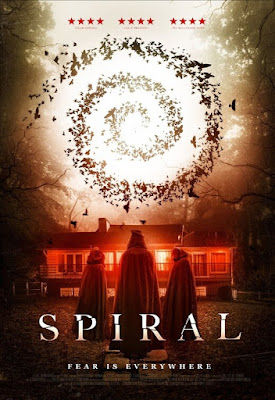 Aaron has no intuition. Malik has no common sense. That would make them the perfect victims for an insidious small-town cult. However, the film suggests they are really being targeted because of their “otherness” as a gay couple. Maybe so, but they certainly make it easy for the shadowy evil doers in Kurtis David Harder’s Spiral, which premieres exclusively on Shudder this Thursday.

Malik still gets flashbacks of his high school lover getting bashed to death before his eyes—and so do we as the audience. The traumatic event has profoundly shaped his persona and worldview. He even still takes medication for the lingering PTSD. Aaron was once married to a woman, with whom he had his snarky daughter Kayla. The three have just moved into a large house that looks comfortable, but gives off bad vibes. Yet, for some reason, only Malik picks up on them.

He also keeps quiet when someone breaks into the house to spray a slur across their living room wall, quickly painting over it before Aaron or Kayla can see it (to “protect” them, or something). However, when the unwelcoming old man across the street has a late-night freak-out in their lawn, Malik starts to suspect the neighborhood really is out to get them. Nevertheless, Aaron insists everything is fine, except maybe Malik’s paranoia. Of course, Kayla is no help in any of this, because she is a teenager.

Jeffrey Bowyer-Chapman really is terrific. He holds viewers’ attention in a vice-like grip with his intense performance as Malik. Unfortunately, the character is so klutzy and self-defeating (dropping things at inopportune times and the like), it undercuts Bowyer-Chapman’s good work. On the other hand, it is hard to buy into the blinkered, slow-on-the-up-take Aaron. Thesp Ari Cohen gamely tries to bluff his way through, but the character’s reactions only make sense from a screenwriters’ perspective, helping to advance the narrative.

Like many previous horror movies, Spiral hinges on Aaron giving more credence to strangers than the committed partner he sleeps next to every night. By the way, there is a reason the film is called “Spiral,” but if you are not watching closely, you could miss it. That is actually an indicator of one of the film’s deeper problems. Screenwriters Colin Minihan (who helmed the far-superior What Keeps You Alive) & John Poliquin are clearly more interested in scoring points in the ongoing culture wars than taking care of fundamental horror movie business. It is a shame, because the last ten minutes really are terrifying. If there had been more of that imagery (seen on the one-sheet) incorporated throughout the film, it would have been scarier and generally more effective. Instead, there is just too much time wasted before the pay-off.

There is a recurring motif that perfectly represents the film’s cynical manipulativeness. As a freelance writer, Malik agrees to ghost-write an academic’s memoirs, but as he watches VHS tapes of his subject, he is annoyed to discover the man takes Evangelical Christian positions on social issues. In real life, both sides would do sufficient due diligence to prevent such a mismatch. Nevertheless, the film uses the droning talking head to suggest the world is out to get Malik, when it really should have been playing up the sinister weirdness of the neighborhood. Not recommended, Spiral starts streaming this Thursday (9/17) on Shudder.
Posted by J.B. at 6:00 AM