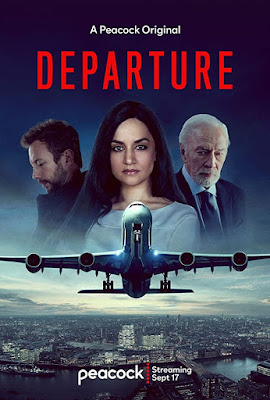 Even before Malaysian Airlines 370, we’ve been fascinated by disappearing airliners. The original Twilight Zone went to this well several times in episodes like “The Arrival,” featuring the mysterious landing of a completely empty plane and “The Odyssey of Flight 33,” involving the mother of all jet-streams. Widowed British Travel Safety investigator Kendra Malley has a Malaysian Air situation on her hands, as well as a hacktivist step-son to corral in the six-part limited series Departure, which premieres today on Peacock.

Flight 716 left New York on-route to London, but disappeared after passing Gander. Initially, all signs point to pilot sabotage-suicide, very definitely including what series writer-creator Vince Shiao initially chooses to show us from that fateful flight. However, Malley suspects there is more to the story. This will be her first investigation since her husband’s suicide by auto-wreck, but her boss Howard Lawson needs the best. He would also prefer to wrap things up quickly and neatly, especially for the major British aviation company sweating out the investigation. Fortunately, Dominic Hayes, the team’s law enforcement liaison (formerly of Scotland Yard) is on her side when it comes to dotting “i’s” and crossing “t’s.”

The UK government would definitely prefer a finding of pilot error. Malley’s obnoxious stepson AJ and his netizen echo chamber immediately suspect Russian aeronautical oligarch Pavel Bartok, who happens to have some contentious history with Malley. Yet, she refuses to eliminate technical causes until she can explain everything that happened, step by step. Of course, the discovery of a sole survivor would greatly help getting at the truth, while also raising a battery of new suspicions.

Departure feels slick but conventionally network, so Peacock is probably the right place for it. Nevertheless, Schiao and series director T.J. Scott maintain a brisk pace a drop enough twists to keep most viewers hooked. Yet, what really works is the chemistry that develops between Archie Panjabi and Kris Holden-Ried as Malley and Hayes, respectively. They keep it strictly business through the initial six episodes of Departure, but there are hints their relationship could develop in subsequent seasons. Regardless, they are certainly a photogenic duo of on-screen investigators.

Peter Mensah (from the John Wick franchise) and Claire Forlani add intriguing dimensions as somewhat more calculating members of the investigation team. As a nice bonus, Sasha Roiz looks like he is having a blast chewing the scenery as the slimy Bartok, which is perfect for his character. However, it is hard to see why Christopher Plummer agreed to play Lawson, since the role is basically on par with the average Quinn Martin guest-starring gig.

The is a lot of political finger-pointing throughout Departure, most of which are red herrings. At least the Mossad comes out of it looking pretty good (perhaps the most ethical organization to get pulled into the drama), so you have to give Schiao credit for not succumbing to ugly BDS-bigotry. It is not “Golden Age”-level television, but Departure is highly watchable and it taps into some of our deep collective fascinations. Recommended as a good distraction (right when new programming is starting to dry up), Departure starts streaming today (9/17), on Peacock.
Posted by J.B. at 6:00 AM