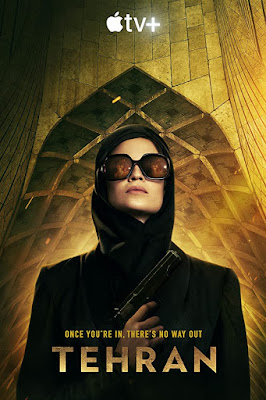 For an Israeli Mossad agent, Tehran is one of the most dangerous assignments to expect. Given the Iranian regime’s insanity and deep-seated anti-Semitic hatred, it is also one of the most likely, especially for a recruit of Persian descent. Such is the case for Tamar Rabinyan, whose parents immigrated to Israel so she could grow-up with a future. Now she is back in her homeland and running for her life in the eight-episode Tehran, created by Moshe Zonder, Dana Eden & Maor Kohn, which premieres this Friday on Apple TV.

The first phase of the operation went pretty smoothly. The Jordanian airliner bound for India was forced to land in Tehran for emergency repairs. During the layover, Rabinyan was able to trade places with an Iranian who was desperate to leave the country and had an identity that would be helpful to her mission. However, an Israeli couple who booked last minute tickets unexpectedly complicated the mission. While understandably freaking out, she recognized Rabinyan from their military service and Iranian counter-intelligence officer Faraz Kamali noticed her noticing.

Assuming Jila Gorbanifar’s identity, Rabinyan gains entry to Tehran’s power station, where she intends to tap to the air defense system, through a back-door. However, her hacking excursion quickly goes sideways. Soon, Rabinyan is in the wind, with her identity burned. Going off the gird and way underground, Rabinyan contacts Milad, a.k.a. “Sick-Boy,” a dissident Iranian hacker, whom she had established a flirtatious relationship over the dark web. To accomplish her objective, she needs Milad’s help, but she will be constantly conflicted regarding how much she can trust him and how much information she should withhold.

Tehran vividly captures a sense of how scary the city could be for a fugitive outsider. It feels a lot like the Vienna of The Third Man, but with the creepy trappings of an Islamist theocracy layered on top. Even though it is Israeli-produced, Tehran is definitely le Carré-esque in the way it depicts both sides ruthless realpolitik machinations. Still, the intrigue and duplicity are fun to follow.

In fact, Shaun Toub is one of the most attention-grabbing cast-members as the shrewdly intelligent Kamali. Even though he faithfully serves an oppressive regime, he is definitely an improvising cowboy-type. Likewise, Navid Negahban (who was the husband in The Stoning of Soraya M) is terrific as Masoud Tabrizi, an Iranian working as a Mossad sleeper agent. He is also a loving family man and an Iranian patriot, who believes his work with the Israelis is the best way he can also serve his country, which probably makes him the series’ most compelling character.

Menashe Noy and Liraz Charhi also bring a lot of grit and nuance to Tehran as Meir Gorev, the Mossad operations commander and Yael Kadosh, Rabinyan’s handler (also Persian). The relative weakness of Niv Sultan and Shervin Alenabi (arguably the leads, playing Rabinyan and Milad) might sound like a significant undermining flaw, but everyone else is so compulsively watchable, we can sit through their hackers-with-sexual-tension melodrama, waiting for the show to switch back to the good espionage stuff.

If you need resolution, let’s just say there is plenty of room left for a second season of Tehran. Yet, in a way, that is very much in keeping with the tone of the show, which fully explores the ambiguous complexity of Israelis’ historic attitudes towards Iran and the inherent social and class-based conflicts of contemporary Iranian society. It is a smart, suspenseful show that hopefully has more revelations to come. Recommended with enthusiasm, Tehran premieres this Friday (9/25), on Apple TV.
Posted by J.B. at 6:00 AM