The Price of Fear: Theater of Blood 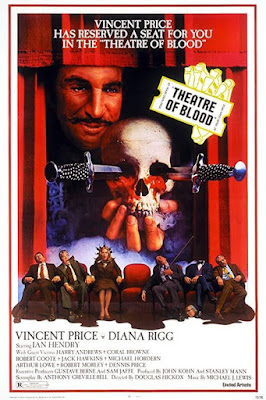 Among his many talents, Vincent Price was quite renowned as a chef. He must have enjoyed the chance to employ his culinary skills in this film. Admittedly, it is for a macabre meal inspired by Titus Andronicus, but it is still cooking. Reportedly, this was one of Price’s favorite films and also a favorite of his co-star, the late, great Diana Rigg. Fittingly, Douglas Hickox’s Theater of Blood is one of five films coming to Shudder as part of their “Price of Fear” collection.

The late Edward Lionheart was a classically trained traditionalist, but he was also terribly corny, at least according to the dismissive London drama critics. They panned his performances and then humiliated him when he inexplicably got the idea in his head that he was due to win their annual award. That would make him the logical suspect when someone starts murdering members of the drama circle in grisly ways inspired by Shakespeare’s bloodiest scenes, except Lionheart is dead—or rather presumed dead.

For a while, plodding Inspector Boot focuses on Lionheart’s loyal daughter Edwina, but she has no intention of cooperating and no sympathy for the fools who belittled her father. Despite their police protection, Lionheart and his accomplices, a gang of homeless crazies and a creepy hippy, keep cutting through the critics. It rather alarms Peregrine Devlin, the arrogant chair of the critics’ association, who was the first to suspect Lionheart.

Theater is a wonderfully macabre but erudite film that offered Price a chance to perform some of the greatest Shakespearean speeches, while still giving people what they wanted from a Vincent Price movie. It is easy to see why the film was adapted for the legit London stage in 2005, with Rigg’s daughter Rachael Stirling taking on her role as Lionheart’s daughter. It certainly worked out for Price too, since he met his third wife Coral Browne while she was playing one of the ill-fated critics.

In fact, Price and Rigg were right. Theater is a very distinctive horror film that combines the baroqueness of The Abominable Dr. Phibes with the tragic heft of Shakespeare and the grittiness of Death Line (a.k.a. Raw Meat). Lionheart’s Shakespearean death traps are wonderfully theatrical, but Price’s performance is often surprisingly poignant, especially his ostensive suicide scene, involving Hamlet’s soliloquy. He and Rigg are terrific together. Frankly, fans had never seen Rigg as she appeared in Theater—you sort of need to see it to understand why.

There is also a highly accomplished supporting cast waiting to be duly murdered, including Jack Hawkins in his final screen role, playing one of Lionheart’s saddest victims. True to his typecasting, Robert Morley chews the scenery and everything put in front of him as gluttonous critic Meredith Merridew. However, the biggest surprise is how good Ian Hendry (ironically John Steed’s first partner in the first, nearly entirely lost season of The Avengers) is playing the snarky but remorseful Devlin. He gives the film an edge that serves it well.

You might think a film about critics getting mutilated by actor they skewered for his hamminess would hit a little too close to home. However, I was proud to give rave reviews to Mom and Dad and Pay the Ghost, so I’m not worried. Regardless, Theater of Blood is a jolly good time and a perfect showcase for the legendary Price. Very highly recommended, it starts streaming Thursday (10/1) on Shudder and will also be available as part of the Criterion Channel’s October 70’s Horror collection.
Posted by J.B. at 6:00 AM