Immortal: Tales Where They Don’t Die at the End 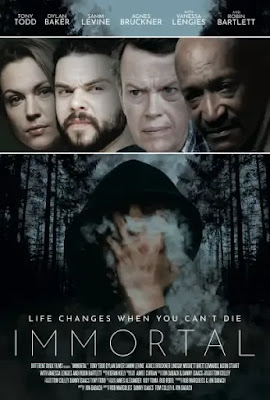 For Larry Talbott (a.k.a. The Wolfman), immortality was a source of unending horror rather than a gift. Some of these characters might very well agree. It turns out there are people out there who just will not die. In most cases, they have the Wolverinish healing powers to go with an unending life-span. They also tend to learn of their rare status at the darnedest times in the shared world/concept anthology Immortal, written by Jon Dabach, which releases today on VOD.

People are hunting people yet again—the cinematic epidemic continues (following The Hunt, Bacurau, The Prey, etc., etc.)—in the first storyline, “Chelsea,” directed by Rob Margolies. However, the stakes are higher this time around, because the prey is a high school track star and the hunter is consciously immortal. In truth, it is rather clever, but viewers would probably appreciate it more if it came at the end of the film rather than the start.

“Garry & Vanessa” directed by Danny Isaacs also builds towards a “hey there, immortality” twist ending, but this time we’re already expecting it from the start. The titular Garry plans to do something extreme to provide for his pregnant titular wife. Presumably, it will not work out exactly as planned. As a modest bonus, we get to see an incredibly tired looking Mario Van Peebles playing a cable guy.

Things unexpectedly get a little preachy in “Ted & Mary,” directed by Tom Colley, wherein our focal couple give a final interview before he administers her assisted suicide. The good part is Tony Todd pays Ted (quite poignantly). The bad part is the third revelation of immortality is extraordinarily depressing.

By far, the best segment is “Warren,” directed by screenwriter-co-producer Dabach. When Warren is callously mowed down in a hit-and-run accident, he makes a surprisingly swift recovery. Yet, he still isn’t the same as before. Somewhat understandably, he becomes obsessed with the privileged wife of a wealthy trial attorney who slammed into him and then bolted. It is a twisted tale that builds suspense steadily and organically. Plus, Samm Levine is terrific as Warren.

So yes, the film is certainly inconsistent, but the first and last segments are highly effective. In between, you can go to the bathroom, run out for a cup of coffee, and maybe make a sandwich. Still, as far as anthologies go, that’s pretty good. Recommended for the two best parts, Immortal releases today (9/8) on VOD.
Posted by J.B. at 3:00 AM