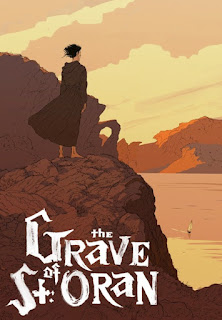 St. Columba is considered one of the Twelve Apostles of Ireland, who was indeed canonized by the Church. Yet, even though Colmcille, a Celtic form of his name is found all over Ireland, Scotland, and Canada (especially Quebec, where many Scots settled), Neil Gaiman isn’t afraid to talk smack about him. The cult favorite fantasist narrates his poem “In Relig Odhrain” throughout Jim Batt’s animated short film adaptation, The Grave of St. Oran, which screened at the 2020 Fantasia International Film Festival.

According to legend, St. Columba and St. Oran were attempting to build a chapel on wind-swept Iona Island, but the walls kept collapsing. The future saints had a vision telling St. Oran to sacrifice himself under the foundation, to keep the walls straight and strong, at no cost to his immortal soul. In Gaiman’s telling, Columba also gives him a little extra encouragement.

The practice of foundation sacrifice was actually Celtic Pagan, rather than Christian, so the St. Oran myth is one of the few instances of the early Church coopting it, at least through stories passed down through the oral tradition. It is already pretty macabre, so it seems like overkill to tweak it, making St. Columba look creepier. Perhaps Gaiman would like to try “punching-up” the teachings of another great Abrahamic religion next—or maybe not.

Still, Batt’s spartan stylized animation looks really cool and it certainly fits the dark monasticism of Gaiman’s poem. You can easily imagine the rain and the chills felt by the monks as the trudge around the craggy isle.

Grave is indeed quite striking visually, but you have to wonder what sort of takeaway Batt and Gaiman intended for viewers. However, Gaiman fans will probably appreciate how well Batt illustrates his words. Earning a very mixed response, The Grave of St. Oran had its international premiere at this year’s Fantasia.
Posted by J.B. at 6:00 AM