No Escape (from Russia’s Sickos) 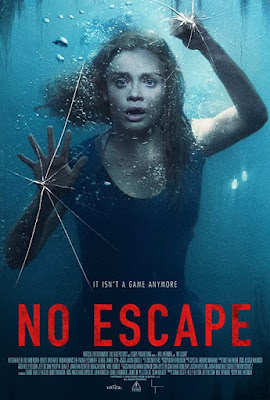 Modern Russia has only two significant economic sectors: fossil fuels (currently in the dumper) and gangterism. Still, that is two more than they had under Communism. Regardless, an extreme adventure Vlogger should have been a little more suspicious when he was invited to try his luck in a hardcore escape room being produced in a former KGB dungeon. Anything for clicks and likes will not be such a wise policy in director-screenwriter Will Wernick’s No Escape, which releases tomorrow on VOD (like pretty much everything does these days).

Cole Turner is celebrating ten years of shallow internet fame, so his friends arrange for a special trip to romantic and luxurious Moscow. It is all being coordinated by Alexei, who is presumably the privileged scion of a fabulously wealthy oligarch. His obnoxious sidekick Dash vouches for the Russian fuerdai, even though he hardly knows him. After some sight-seeing and a little alone time with his ever-patient girlfriend Erin, Turner’s adventure will culminate in an unusually intense escape room experience, set in an abandoned secret Communist prison. What could go wrong? Oh right, probably everything.

Basically, No Escape starts out as an Escape Room-style thriller and evolves into a Hostel movie. A good deal of this film involves Turner being chased by large, shirtless Russian men wearing S&M masks and leather aprons. Well, when in Moscow.

No Escape is essentially what you expect it to be, but Wernick’s execution is slicker, tenser, and generally better than it needed to be. Just about everyone who knows their way around horror and genre thrillers will be able to guess the big twist, but Wernick puts a little extra English on it that is rather effective.

Keegan Allen is insufferably annoying as Turner, but that is sort of the whole point. Holland Roden is also blandly vanilla as Erin, but that is how it generally goes as the thankless love interest in this kind of movie. At least Ronen Rubinstein adds some color as the flamboyantly suspicious Alexei. On the other hand, there is nothing particularly interesting about his girlfriend Viktoria, but (presumably for marketing reasons) thesp Emilia Ares is featured in one of the few stills not shot in the dingy dungeon. Of course, Russian heavy-specialist Pasha D. Lychnikoff is creepy as always as the sinister Andrei.

Look Millennials, bad things happen in Moscow. Just ask Anna Politkovskaya. Granted, Wernick doesn’t really get into Russian politics, but that won’t stop us. No Escape is no classic, but if you are in the mood for a brisk and sleazy youth-oriented blood bath, it scratches the itch. Recommended for slumming genre fans, No Escape releases tomorrow (9/18) on VOD.
Posted by J.B. at 6:00 AM